Albertans aren’t as conservative as you might think, poll suggests

Albertans aren’t strictly conservative. At least not in the way we are stereotyped — or perhaps stereotype ourselves.

Views on social issues in the province are largely progressive, but there’s also a profound commitment to balanced books. This creates a situation where people can be reluctant to support their values with cold cash.

This is one of the stories emerging from the numbers in a new poll for CBC News, a questionnaire put to 1,200 Albertans about their political preferences and value priorities — followed by a series of focus groups.

It’s a bit of a confounding narrative — some things may surprise Albertans and be difficult to explain to people in other provinces.

Let’s take a look at the numbers.

The first thing that jumps out of the data is where Albertans place themselves on the political spectrum.

The survey asked people to place themselves on a spectrum — left, right and centrist. Most respondents say they fall into the centre, with a lean to the right and few on either extreme. 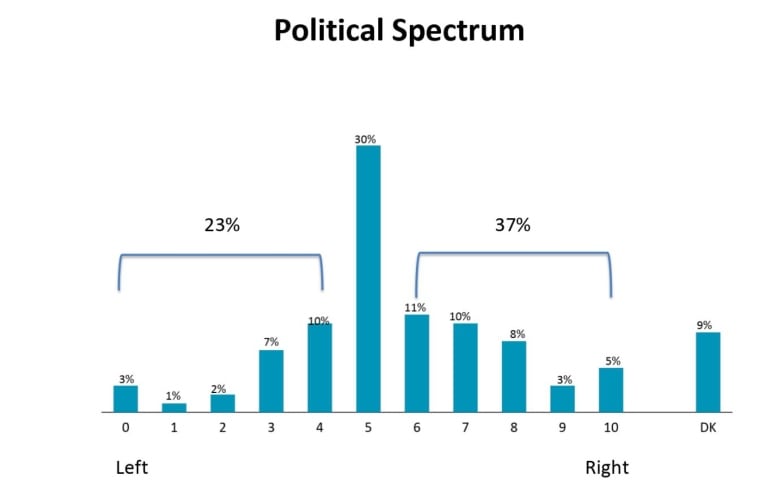 When asked to place themselves on the political spectrum, Albertans bunched in the middle. (Janet Brown Opinion Research)

“I think the stereotype in Alberta is that we’ve got a lot of radicals here, particularly people who are radically right wing, but what that question showed is that we don’t have too many people that are on the extremes,” said Janet Brown, of Janet Brown Opinion Research, who conducted the poll with Trend Research for CBC News.

‘Most people are moderates’

The findings can seem counterintuitive in a province that, since 1935, had been governed by conservative governments, before voting NDP three years ago.

When we took this data to our focus groups — one for respondents who identified as left wing, one for the right and one for the centrists — the vast majority across the spectrum said they weren’t surprised.

“Most people are moderates. But the far left and the far right gets more press because the people in the middle aren’t complaining as much,” said John Toplensky, who took part in the left-wing discussion.

Tristan Arsenault, a 22-year-old self-identified right winger, said one factor could be a younger generation’s acceptance of more progressive policies. Brown says that trend is backed by her research over a period of years.

“When we track this stuff over time, we definitely see that openness to different lifestyles and different ways of living seems to grow year over year,” said Brown.

Only half believe when businesses make a lot of money, everyone benefits.

And while it’s a majority, only 52 per cent think the government should leave it to the private sector to create jobs. 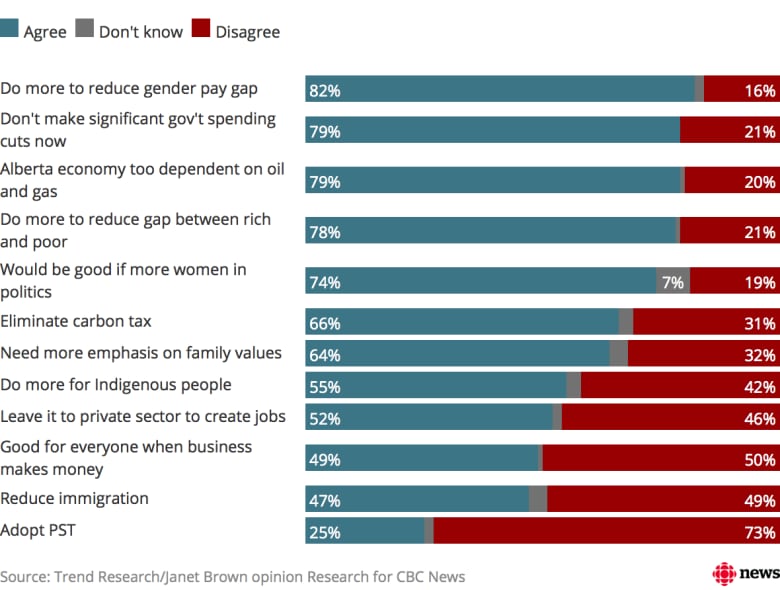 “We are not socially conservative, we are broadly supportive of reproductive rights, of LGBTQ rights,” says University of Calgary political scientist Melanee Thomas, commenting on the survey results.

“It’s not to say that there aren’t Albertans who are opposed to these things, but on balance we’re overwhelmingly socially progressive.”

All this seems to suggest the stereotype of the socially regressive Albertan should be put to rest. But there are still some issues on which Albertans veer right.

Sixty-four per cent said the country would have fewer problems if there were more emphasis on family values. Forty-seven per cent would agree to cutting immigration levels. The environment barely registered as a concern in the poll — only two per cent mentioned it as top of mind.

A majority, 79 per cent, think Alberta is too dependent on oil and gas, but chafe at the idea of the carbon tax, with 66 per cent saying it should be eliminated. And on the subject of taxes, only 25 per cent think Alberta should bring in a sales tax.

All these numbers lead to a disconnect, says Thomas.

“Cognitive dissonance runs strong with Albertans. We want all of these things that are fiscally expansive,” she said. “We want big government. We don’t want to pay for it.”

There’s a tension that comes from holding progressive values, but being unwilling to pay more tax to support them.

“So we talked to them about how do they balance out their economic concerns versus their social concerns. And what we heard from a lot of people is that both of those things are important to them, but if we don’t have the economic stuff figured out, we won’t have the money to spend on social policies.”

Brown says this is the reason that when asked what issues were on the top of their minds, 47 per cent of respondents said pipelines or the economy.

Previous surveys conducted by Brown showed healthcare and education topping the list. But in this most recent survey, those two issues were less of a primary concern in the midst of a slow economic recovery. Healthcare was only the top issue for four per cent of respondents, while education was at two per cent.

In the focus groups, people framed a lot of the discussion about social issues in terms of economics.

“You know, we appreciate the great health care, we appreciate education, there’s changes that we can make on that. We talk about ways to better balance the budget and spend the money we have,” said Stephen Carlton, during the conservative focus group.

“But this is our province’s income that is being limited and being hamstrung by the pipeline issue. And if we can sort that out, it opens up a whole range of opportunities in terms of additional money coming in.”

“I think that they’re voting for their interests that they prioritize higher than their social views,” she says.

Still, 79 per cent of Albertans said now is not the time to cut social programs like health and education.

There is a nuance to add here. What most people refer to as fiscal conservatism, others say really should be called tax aversion.

This dichotomy — in the Alberta case between tax aversion (as opposed to fiscal conservatism) and social justice — is not a new phenomenon. In the United States, many studies have examined the idea of so-called “symbolic conservatives” who are operational liberals. In other words, those who call themselves conservatives but support progressive policy views.

Thomas says the situation in Alberta is similar.

Perception and misperception. Values and identity. One year out from the next provincial election, Alberta’s political parties will be attempting to craft political messages and policy statements on voter preferences that may not be as fixed as previously thought.

The random survey of 1,200 Albertans was conducted using a hybrid method between March 13 to April 5, 2018, by Trend Research under the direction of Janet Brown Opinion Research. The sample is representative along regional, age and gender factors. The margin of error is +/-2.8 percentage points, 19 times out of 20. For subsets, the margin of error is larger.

The survey used a hybrid methodology that involved contacting survey respondents by telephone and giving them the option of completing the survey at that time, at another more convenient time, or receiving an email link and completing the survey online. Trend Research contacted people using a random list of numbers, comprised of half landlines and half cellphone numbers. Telephone numbers were dialed up to five times at five different times of day before another telephone number was added to the sample. The response rate among valid numbers (i.e. residential and personal) was 20.8 per cent.