What Gets Measured Gets Done campaign puts media on notice, aims to bridge gender gap in Canadian news media by 2025

October 18, Ottawa – In recognition of Persons Day, Informed Opinions launched “What Gets Measured Gets Done”, a national campaign aimed at bridging the gender gap in news and information media.

At the official launch, Informed Opinions Catalyst and Founder, Shari Graydon issued a challenge to journalists across Canada. The non-profit project will monitor the presence of male and female sources in influential news media, and issue an annual report card each October.

“Our goal is to celebrate those showing leadership in representing diverse perspectives, and motivate those lagging behind, engaging news-consuming citizens to demand better in the process,” says Graydon. 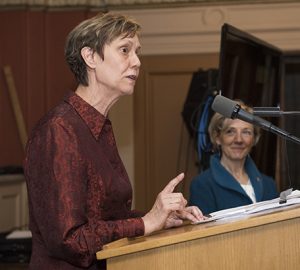 At a special event on Parliament Hill, Informed Opinions honoured University of Ottawa law professor, Elizabeth Sheehy, and TVO’s The Agenda for their leadership in ensuring that women’s perspectives are equitably integrated into Canadian public discourse.

Since participating in an Informed Opinions media engagement workshop seven years ago, professor Sheehy has written two dozen op eds and given more than 100 interviews. Her commentary has helped to provide critical context for the criminal justice system’s handling of violence against women, and indirectly to prompt police forces to adopt a new approach to responding to sexual assault cases. 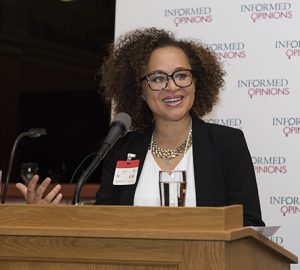 Also recognized was the commitment to gender parity demonstrated by the producers and hosts of The Agenda, TVO’s weekday public affairs show. In addition to devoting two full programs to the impact of women’s under-representation in recent years, The Agenda has also been actively tracking its own performance. Over the past year, it achieved an average of 43% female guests, well above the Canadian media average. The Agenda’s summer host Nam Kiwanuka attended on behalf of TVO.

The event’s sponsoring host, Senator Kim Pate, also has a long history of sharing her knowledge on prison reform and incarcerated women with the media. She and professor Sheehy are among the more than 2,000 women who have participated in Informed Opinions’ workshops since the project began in 2010. Collectively they have helped increase the representation of women experts quoted and featured from 22% to 29% of the total. 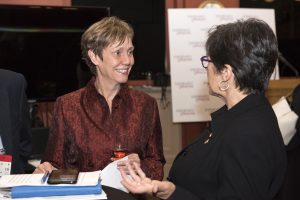 On Thursday, October 19, Professor Sheehy will also be presented with the Governor General’s Award in Commemoration of the Persons Case. Senator Pate and Shari Graydon are both previous recipients of this award, which recognizes those who’ve made a significant contribution to advocating for the advancement of women. 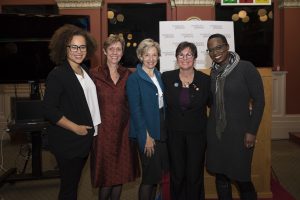 “Although Canada is among the most progressive countries in the world, our research finds that men’s voices continue to outnumber women’s by a ratio of more than two to one in the news media,” says Graydon. “That’s a problem for our democracy, but it’s fixable. Authoritative women are available, and journalists who actively track the diversity of their sources already do a better job of reflecting the audiences they serve.”