7 WAYS TO DISABLE GENDER STEREOTYPES FOR YOUR DAUGHTER 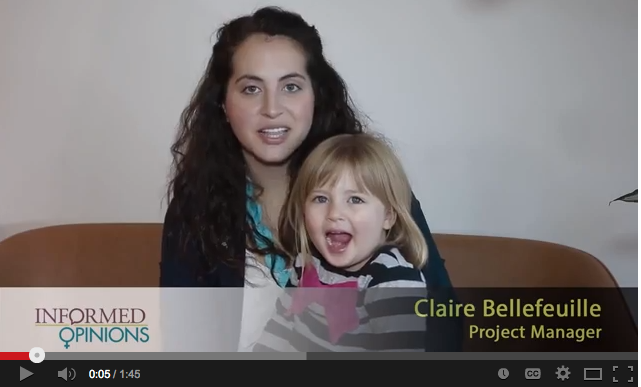 Last month, Informed Opinions’ Project Manager, Claire Bellefeuille published an op ed in the Ottawa Citizen expressing the wish that people would stop telling her daughter, Lily, how beautiful she is. She confessed that,

“…receiving constant accolades about her physical appearance gives my daughter the impression that her value is predicated on how she looks.”

And then she explained that Lily was refusing to wear jeans in cold weather because she’d already learned that she got more compliments when dressed in frilly dresses. We turned our discouragement over the fact that Lily had discerned this even though she was barely out of diapers into a 2-minute video campaign to reinforce the importance of strong and visible female role models who are celebrated for the brains, rather than beauty.

All sorts of research backs up why our tendency to focus girls’ attention on stereotypically feminine traits and behaviours undermines our aspirations for them to have access to every career and achievement opportunity available to boys.

Kids start to understand gender roles before they’ve reached their third birthday. And pre-school is where they begin developing social prejudices, including those based on gender.

Many of the things we do to reinforce gender roles are unconscious and reinforced by years of living in societies that still value men and women differently. The following advice reframes a list of “don’ts” I came across recently to focus on the kinds of positive choices we can all make around the girls and young women in our lives.

Claire did a great job of making this point, encouraging us all to bite our tongues when moved to comment on superficials, and look for other qualities to praise, instead:

… tell a child or a teen how much you appreciate their thoughtfulness or generosity… In the spirit of the season, give them a reason to glow from the inside out.

2. LET HER BE BOISTEROUS

Encouraging girls to be quiet and polite, while allowing boys to be rambunctious, sets up a behavior pattern that ultimately reinforces the women as “pleaser” trap. And the desire to be likeable and accommodating can inspire women to avoid conflict and refrain from challenging the status quo, neither of which will serve those who aspire to leadership roles.

Much hand-writing has already occurred over the unfortunate tendency of marketers to paint everything meant for girls a perky bubble-gum pink. Despite innate differences between males and females, much research suggests that the way we socialize kids has more to do with their preferences than genetic predispositions.

Many toys targeted to girls are appearance-based, while those aimed at boys are more likely to encourage the kinds of exploration and problem-solving skills that will be useful at work and in leadership capacities.

It’s almost impossible to prevent girls growing up in our world from being exposed to the princess mania, but that doesn’t mean that you have to let the Disney definition – “Rescue my hourglass figure from harm so I can live happily ever after!” – prevail.

I know for a fact that the hard jobs in Claire’s household don’t always get relegated to her husband. Just this weekend she was captured on film scaling a 12-foot high rope, and she’s also been known to compete in gruelling tests of strength and endurance! 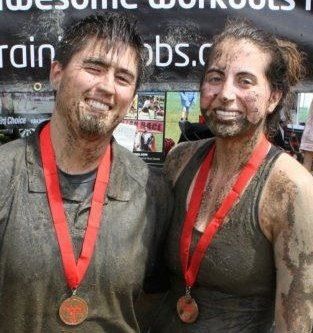 Claire and her husband Pierre after having completed the Spartan Race. (I know: crazy!)

But there are easier ways to address this issue: make sure your daughter gets to see you wield a hammer or push a lawnmower now and then, encourage her to take out the garbage, and show her how to open the new jar of peanut butter by banging the edge of the top on the counter first.

6. GIVE HER A CHANCE TO INTERACT WITH BOYS

All-girls’ schools have for years trumpeted the advantages available to those attend them. New research questions that. Regardless of who they’re surrounded by in the classroom, it’s useful for girls to have the opportunity to develop the social skills necessary to interact with boys.

Studies have found that single-sex segregation influences what kinds of social skills, styles and expectations develop, and the lack of exposure to boys is likely to make it harder for girls to integrate into male-dominated fields or workplaces later on.

In an age sensitive to the impact of anorexic-looking models and the devastation of social media assaults, this should be a no-brainer. But so much of our culture perpetuates the constant critique; standing at a check-out counter in the supermarket alone makes it hard to avoid the “Crimes against bikinis” and “who wore it better” features.

At very least, we can control the things we say in the presence of girls: we can avoid commenting on the bodies of celebrities, confessing to our own physical insecurities, or focusing undue attention (pro or con) on anyone’s physical parts. It’s possible to promote healthy eating and regular exercise without the relentless appraisal attached to the practice by the body image police.

Given the cultural onslaught we’re up against, our work amplifying women’s voices has to start early — by encouraging girls to play big.