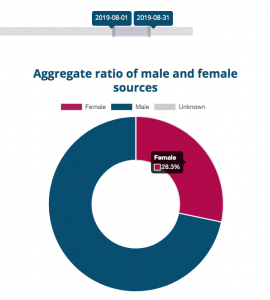 This report describes the impetus for, and preliminary impact of, the Gender Gap Tracker, developed in collaboration with the Big Data Hub at Simon Fraser University. This innovative analytics tool measures – in real time – the gender of those quoted and featured in Canada’s most influential news media.

We are grateful not only for the essential support of Dr. Maite Taboada and her colleagues at Simon Fraser University, but for the funds provided by the federal department of Women and Gender Equality (formerly Status of Women Canada) that permitted us to publicly launch and promote the tool over the course of its first seven months. 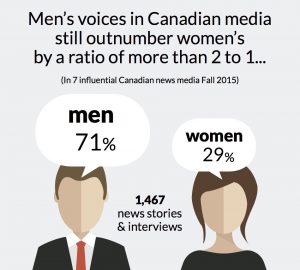 A new study reveals not only that women remain significantly underrepresented as subjects and sources in the Canadian media, but that despite increasingly widespread attention to the problem, little has changed in more than two decades.

The research, commissioned by Informed Opinions, shows that men currently account for 71% of all those quoted or interviewed for newspaper articles and broadcast segments.

The independently-conducted study reviewed more than 1,400 articles and broadcast segments from seven Canadian newspapers and media outlets over the course of three distinct monitoring periods between October and December 2015.

The results reveal that women’s voices make up only 29% of those being heard on air or quoted in print.

When individuals who were neither Canadian nor in Canada were omitted from the sample, female representation rose slightly to 32%.

What’s most disappointing is that so little has changed in more than two decades.

Content analysis conducted annually by Media Action between 1990 and 1993 found the number of women quoted or interviewed in the Canadian media rose marginally from 17% to 22%.

However, the ratio of male to female voices in the current study varied considerably from one news outlet to another, suggesting that journalists who make an effort are able to reflect greater diversity of sources and perspectives than those who don’t.

In a survey of the editorial pages of four major English-language Canadian daily newspapers earlier this spring, the amount of space devoted to female commentators’ perspectives appeared to increase significantly over a similar study conducted three years ago. Whereas opinion pieces written by women in the Globe and Mail, National Post, Ottawa Citizen and Toronto Star accounted for only 11% of those published in a period sampled in 2010, data collected in February – March of this year showed a doubling to 22% of all op eds.

The Ottawa Citizen’s data remained consistent between the two periods (about 28%) – and the highest among the four papers), but op eds written by women increased in the Globe and Mail and the National Post from 8% and 9% respectively in 2010, to 23% each this year. TheToronto Star, which had published no female op ed contributors in our previous sampling, featured 15% female experts this time.

This increase of women’s voices on op ed pages appears to be the result of a number of factors:

Our 2013 snapshot was more rigorous than the previous research, capturing three full weeks of each paper’s commentary, rather than the one to two weeks studied in 2010, and including pieces in both the print and online editions. (The limitations of the shorter 2010 sample included, for example, what turned out to be an anomalous drop in women’s commentary in the Globe. Previous research had documented the paper’s female op ed ratio ranging from 15 to 20%, well above the 8% we found.)

However, anecdotal evidence also suggests that more women are submitting commentary than ever before, and newspaper editors are more attuned to the under-representation of women on their pages than they were three years ago, and are working harder to address the imbalance.

The Globe and Mail, which has been supplementing its print pages with an online commentary hub, published almost three times (77) as many external commentators as the other papers studied (24, 25 and 29).

Female columnists at the Toronto Star, Globe and Mail and Ottawa Citizen contributed about two-fifths of the papers’ staff commentary (40%, 39% and 37% respectively).

In contrast, the National Post sample (gathered online) featured only 20% of columns written by female writers. However, some of the Post’s regular contributors maintain regular blogs, and a few of the male writers are especially prolific in this respect, which had an impact on this ratio.

What kinds of experts dominated the pages? Research scholars were featured most often by The Toronto Star (50%), the Globe and Mail (40%) and the Ottawa Citizen (39%), followed by think tank or NGO contributors (16%, 24% and 22% respectively). Writers and artists (broadly defined) made up the third largest category at both the Globe (9%) and the Citizen(22%), followed at those papers by journalists from other media (8% and 11%).

The National Post was again an outlier, featuring think tank or NGO contributors most often (27%), followed by media and academic writers (23% each), and political authors (11%).

Since its launch in 2010, Informed Opinions has delivered workshops to more than 480 female experts across the country, offering them insights into how to effectively translate their knowledge into short-form persuasive analysis appropriate to commentary pages and websites. The majority of our workshop participants have been university researchers, but a significant number work in the non-profit sector (including think tanks, associations and health and social service organizations).

More than 100** of our “graduates” have since published commentary in the newspapers studied, as well as in other dailies and online sites, on a wide range of issues. Most are also listed in our online Experts Network, which is designed to make it easier for journalists looking for expert women to find them.

** This number may be closer to 200; we’re only able to reliably track our grads’ commentary when they send it to us for editing feedback, and we know anecdotally that many submit and publish without soliciting the additional support we make available as part of the training we offer.

Building on previous studies in both Canada and the US, and with the help of the University of Ottawa’s Media Relations Office, Informed Opinions monitored the commentary pages of six daily newspapers and analyzed the guest lists of three broadcast talk shows for up to two weeks earlier this spring.*

The results echo those documented by both US research and a recent McMaster University study (see below): women’s perspectives are missing in action in some of the highest profile media vehicles most likely to influence Canadians’ opinions on key public policy issues. Both English and French language media chronically under-represent women’s views. Only 16% of the op eds published in the six papers during the period surveyed were written by women, while female columnists represented 15% of the regular contributors in English language dailies, and 23% in French language newspapers.

The National Post reserves considerably more space for commentary than The Globe, The Star or The Citizen. Despite this, women’s voices are even less well represented in the Post (8% of columns and 9% of op eds) than in any of its competitors. Only the French language Le Droit does a poorer job (6%) among the print publications surveyed. In contrast, Le Devoir boasts the most female-friendly numbers, with women’s authorship comprising 53% of the Montreal-based paper’s signed editorials, 25% of its columns, and 20% of its op eds.)

In the sample studied, The Toronto Star represents a study in contrasts: Female columnists made up an impressive 44% of all in-house commentators, outshining all other English language dailies monitored by a significant margin. However, during the same week, not one of the 10 op eds published in The Star’s pages was by a woman.

Although an ad hoc review of The Globe and Mail’s op ed pages last fall found women-penned commentary at 23%, the week studied this spring reflected a significant (and perhaps anomalous) drop to 8%. Female columnists fared slightly better at 18%, however Margaret Wente, who usually writes three times a week, penned only one column in the period studied, no doubt skewing the numbers. (In the previous month-long sample of Globe op ed pages, Ms. Wente’s views comprised fully 40% of the female perspectives expressed on the paper’s comment pages.)

On the electronic front, both French and English public broadcasters did a better job of including women’s voices than the private station. CBC Radio’s The Current featured 31% female guests (11/35) and RDI’s Sans Frontieres managed 29% (15/52), but CTV’s Power Play, which focuses exclusively on federal politics, included only one woman out of 27 guests.

The dramatic gender gap has serious public policy implications in that the issues presented in these forums both reflect and influence government policy and priorities. The absence of women’s perspectives means that discussions of issues affecting women differently – from health care and labour practices to societal violence and participation in the third sector – fail to benefit from women’s informed opinions.

*Included in the sample were The Globe and Mail, The National Post, The Ottawa Citizen, CBC Radio’s The Current and CTV’s Power Play. Complementary data were also collected from French language media outlets Le Devoir, Le Droit and the RDI program, Sans Frontieres. Each paper was monitored for a minimum of one week, and published between 11 and 35 op eds during the period studied. The overall number of female versus male voices in the form of columns, op eds, signed editorials (which appear in the two French language dailies), and talk show guests was 74 to 288, or 20%.

Sarah Marinelli and Philip Savage of McMaster University analyzed a random sample of 80 opinion-editorials in 2009 from The Globe and Mail and The Toronto Star, examining not only the gender of op-ed authorship, but also the issues addressed, and authors’ professions. The 80-20% gender split was consistent in both papers and similar to the findings of a recent US study conducted by the Op Ed Project, which has recently updated this research.

Approximately 75% of the subjects addressed in the Canadian sample were in “hard news” areas of politics (40%), economics (15%), and foreign and national affairs (10% each). The remaining 25% was split among traditional soft news subjects such as social issues, health care, culture and the environment.

Whereas women comprised 20% of total Op-ed authorship, in the “hard news” subject areas their proportion of authorship dropped by half to 10%, with men writing 90% of all commentary on politics, national and international affairs, and business/economics. By contrast in the softer subject areas (which represented a smaller proportion of total op-eds published – about one-quarter) female authorship rose to 35%.