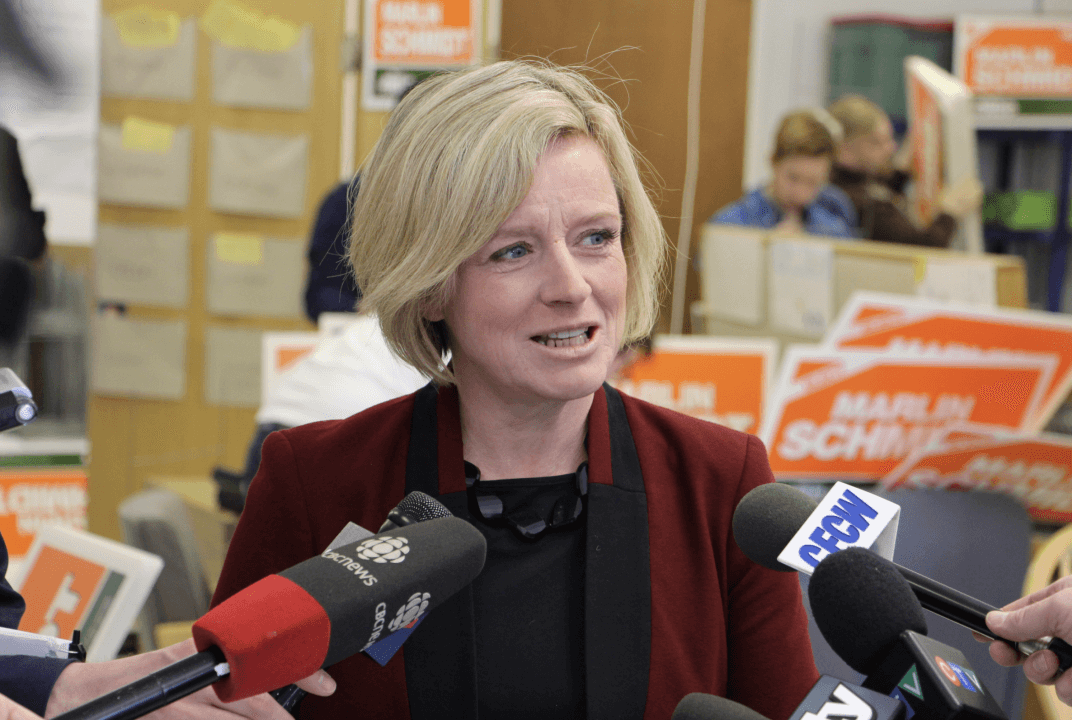 Then-premier of Alberta, Rachel Notley in 2015. Photo by Dave Cournoyer from Edmonton, Canada via wikimedia commons

When Justin Trudeau shuffled his cabinet in January, he retained the gender balance that earned him headlines back in 2015. No one commented, because six years on, it’s become the default for the federal Liberals. That’s good news for the roughly 50 percent of the population who identify as women.

But it’s not remotely enough — and the disproportionate impacts of COVID19 on the people whose voices are least often heard in parliament and the corridors of power have made it clearer than ever why. Women — particularly Black, Indigenous and immigrant women, and those living in poverty, or with a disability or an abusive partner — have been especially hard hit.

Even when we’re not battling a deadly global pandemic, representation is fundamental to democracy. That’s why for decades, prime ministers have appointed cabinets that respected the geographic diversity of this vast country. Ministers are carefully chosen to ensure that concerns from Western, central and Atlantic Canada are reflected around the table. So it’s appalling that it took almost an entire century after the election of the first woman MP in 1921 for gender parity to make it onto the agenda.

Nor is such attentiveness widespread. With the exception of BC, where women hold 46% of cabinet portfolios, most of the premiers have allocated only about a third of ministerial positions to women. And it’s difficult to salute Premier Legault in Quebec for achieving 38% when Jean Charest appointed a gender-balanced cabinet in the province in 2007, before Justin Trudeau’s political career had even begun.

The real trailblazer, however, is Alberta’s NDP leader and former premier, Rachel Notley. She extended the parity principle in a profoundly meaningful way. Speaking with Kate Graham on the podcast, No Second Chances, Notley related the conversation she had had with her staff when she became leader of her party in 2014.

“Don’t even think about bringing me a roster of candidates that doesn’t reflect the diversity of the population,” she told them. So they did. Despite Alberta’s long history of convening among the most male-dominated legislatures in the country, 50 percent of the NDP’s nominated candidates were women, and when the party formed government, both its cabinet and its entire caucus were virtually gender balanced.

This is what leadership looks like. And in the face of entrenched barriers and incremental change, clearly leadership is what it takes.

The early promise of this significant shift was chronicled in 2016 by journalists Sydney Sharpe and Don Braid in Notley Nation: How Alberta’s Political Upheaval Swept the Country. Citing Notley’s background as a labour lawyer and research finding that women are more inclined to collaborate than compete, they lauded her revolutionary approach to relations with the federal government. Instead of picking fights as her recent predecessors had done, she sought solutions.

Two of her cabinet members gave birth while in office, and NDP MLAs introduced a private members bill allowing women to break lease agreements if they’re in danger of violent abuse. This is now law. In response, Calgary Herald columnist Gillian Steward optimistically wrote, “No question, Alberta is setting the stage for a new normal when it comes to women in politics.”

But five years later, the province has reverted to business as usual. In the United Conservative Party, women represent just a quarter of the caucus and premier Jason Kenney has made fed-bashing a cornerstone of his approach. The UCP also appears to be going out of its way to alienate women, canceling the NDP’s popular childcare program, threatening to restrict access to abortions, and attacking female critics.

Kenney’s record unpopularity, especially among women, is no surprise, and if an election were held in Alberta tomorrow, Rachel Notley would likely be given a second opportunity to re-establish that “new normal”.

Now that I live in the province, that gives me hope. But hope is not a strategy. And women in every region of this country deserve much better. We’re integral to the labour force and the economy, we pay taxes, and communities could not function without our unpaid work. We also teach school, deliver health care and, not incidentally, conceive, birth and raise the children our collective future depends on.

We need an equal voice where decisions are being made about our collective futures. And political parties of all stripes, in all jurisdictions, need to stop pretending incremental change is defensible. The systemic barriers baked into a system designed by and for men 150 years ago is not up to the task. What’s required is the solution modelled by the Alberta NDP: recruit slates of candidates that reflect the population they seek to represent — not just in terms of gender balance, but other diversity metrics, too.

The national advocacy group, Equal Voice, has been championing the cause of gender equality in politics for more than two decades, conducting research, convening campaign schools for women and drawing attention to the problem through their inspired “Daughters of the Vote” program.

These are laudable initiatives. But progress remains glacial, and “what gets measured gets done” has a demonstrated impact on results. More importantly — as Rachel Notley demonstrated — party leaders have the singular power to address this problem.

Shari Graydon is the Catalyst of Informed Opinions, a non-profit working to amplify the voices of women, Two-Spirit and gender-diverse individuals and ensure they have as much influence in Canada’s public conversations as men’s.

We train women, Two-Spirit and gender-diverse individuals to speak up more often and share their insights more effectively.

And your donation can help ensure that their perspectives exert influence in every arena that matters.