Diverse sources are a hallmark of quality journalism, as the pledge below makes clear.

More and more journalists around the world are publicly committing to better reflect the audiences they serve by ensuring their stories feature perspectives informed by diverse experience. And many are monitoring their own performance in pursuit of this goal.

Respected news organizations actively track the gender ratio of their sources. They’ve found that doing so results in richer stories, as well as more diverse and nuanced perspectives that better reflect the realities of the citizens they serve.

Adrienne Lafrance, now the Executive Editor at The Atlantic, wrote in 2015 about what she learned from analyzing a year of her reporting for gender bias.

Ed Yong, a science reporter for The Atlantic calls his tracking spreadsheet “a vaccine against self-delusion” and explains why he spent two years trying to fix the gender imbalance in his stories.

Ros Atkins, a producer at BBC, challenged his producer colleagues to monitor the gender of their sources in pursuit of achieving a 50-50 balance.

Bloomberg News is actively working to improve gender balance and increase ethnic diversity of their sources.

I pledge to track the gender ratio of my sources to hold myself accountable and better represent a diversity of perspectives in my journalism.

* The Atlantic’s Ed Yong calls his own tracking spreadsheet “a vaccine against self-delusion.” Since Yong began tracking his sources, he’s been able to achieve a 50-50 gender balance. He estimates that the achievement required an investment of approximately one additional hour of work per week.

Strategies to diversify your sources

Our databases of qualified sources make it easy for you to find women with informed opinions who have committed to responding to media queries. And tacking this downloadable postcard to your wall will serve as a visible reminder of why it’s important. Strategies to diversify your sources 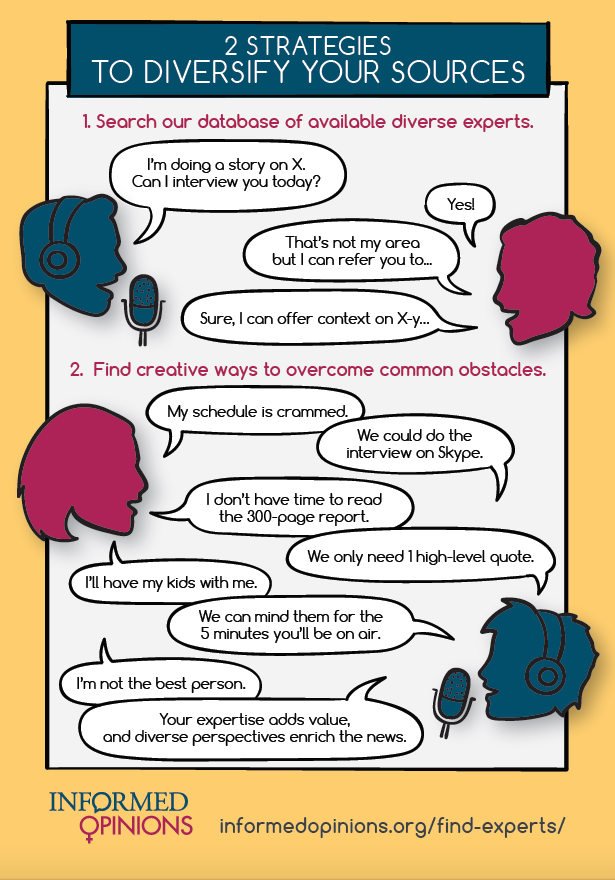 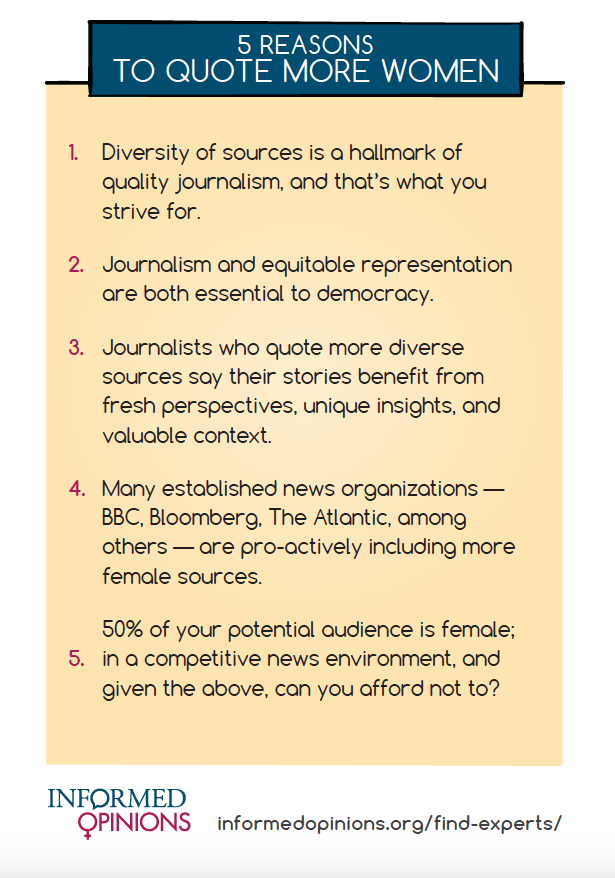