How do you draw public attention to rampant discrimination against women restaurant workers? I played the celebrity card, and heightened the drama by contrasting the red carpet behaviour of Hollywood A-listers, Sandra Bullock (rooted to the spot by her heels) and Hugh Jackman (bounding down Yonge Street posing for selfies with fans). 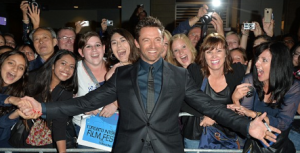 My recent op ed in the Ottawa Citizen and Montreal Gazette takes aim at the ubiquitous and indefensible imposition of high heels on female wait staff, which handicaps them — both figuratively  and literally. 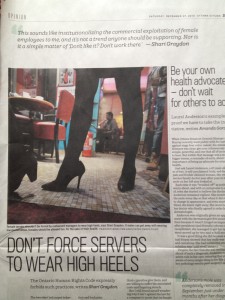 Because columnists like to take time off at Christmas, there’s more space to fill in the newspaper. What this meant for my piece was that editor Kate Heartfield supplemented my words with a large format photograph and two pull-quotes, making it impossible to miss.

So I was disappointed to discover that it generated only two comments on the Citizen‘s website — and, even more disappointingly, both were from male readers who had a narrow and dismissive view of the issue.

However, yesterday, a colleague mentioned he’d seen my piece on the Citizen‘s Facebook page, which it had never occurred to me to visit. There I discovered 43 comments (most of them thoughtful and supportive, and many of them from women), 426 “thumbs up”, and 89 shares.

Given that my goal in writing the op ed was to change an egregious policy, I was greatly encouraged by this response. And I’ll be printing off copies of the piece to share with the server I spoke with, as well as her manager.

If you’d like to help prevent women working in restaurants from being compelled to wear dangerous footwear and revealing clothes (also forbidden by human rights codes in Ontario, BC, Quebec and Alberta — the four provinces I checked), please share the commentary through your own social media media channels, and with exploited restaurant employees near you.

In the meantime, don’t get disheartened if the news site where your analysis appears features comments only from people trashing your ideas (or attributing ideas to you that you didn’t actually express, or calling you names, or otherwise engaging in troll behaviour). Because they’re not representative. Here’s the image you want to call to mind in response: 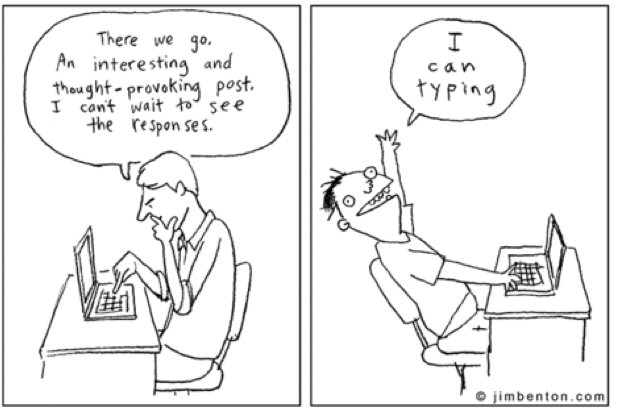