In the 10 years since Informed Opinions began training women across sectors and fields to share their insights and analysis with the media, we’ve delivered almost 250 workshops to more than 3500 participants. More than half of those sessions have focused on a five-step process designed to support subject matter experts in translating their knowledge on important issues into timely, accessible and engaging opinion pieces.

Although we’re not able to reliably keep track of all outcomes, we do know that more than 1000 op-eds written by our “grads” have been published across a wide range of Canadian print and online news platforms. (The term “op ed” is a throwback to print newspapers when the opinion page in most papers appeared opposite the editorial page. For decades, opinion pages have provided an opportunity for members of the community with knowledge about a particular issue to submit argumentative pieces for publication.)

Curious to see if our training impact was translating into moving the needle in an aggregate way, last November, Informed Opinions’ board chair, Nobina Robinson, and advisory committee member, June Webber undertook a month-long content analysis study of the online comment hubs of three daily newspapers. (These typically feature more content than their print counterparts, because space is not at such a premium. Recognizing that more and more people are now consuming their news online, we chose to focus there, rather than the more restricted print.)

The coding efforts captured the author, gender, topic, title and affiliation of every opinion piece by both regular columnists and op ed contributors at The Globe and Mail, The Ottawa Citizen and The Toronto Star for the entire month.

The results — when compared with similar research we did in Spring of 2010 and February-March of 2013 — show that we are, indeed, making progress. Here’s what we found: 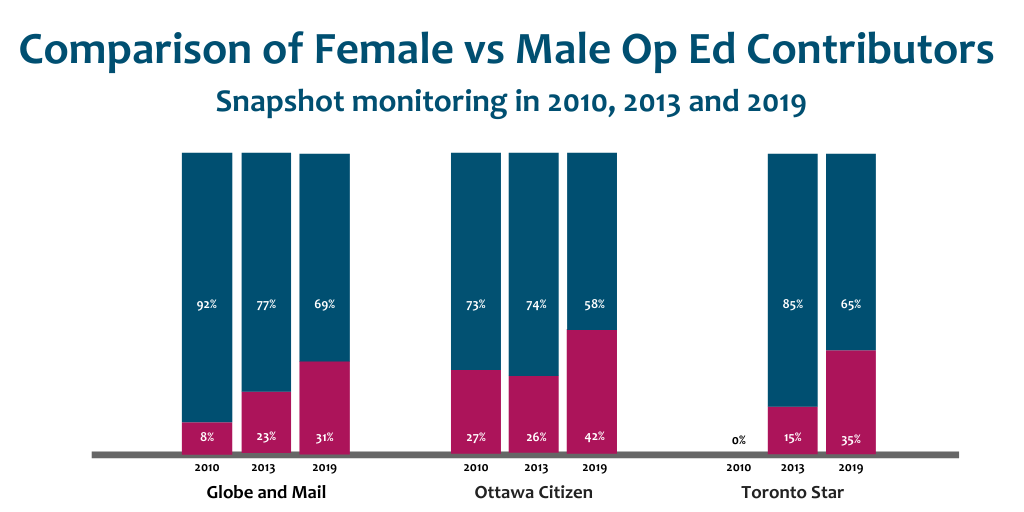 Over the past ten years, all three papers improved the representation of female contributors to their opinion sections, increasing commentary by women by at least eight per cent, and as much as 16%. And some of the women published in each paper are, indeed, women who’ve participated in our training and/or who are featured in our database.

The data on female columnists (staff or freelance writers who are given a regular platform by the news outlet) revealed a more complicated picture. During the month of November, 57% of the published commentaries in the Toronto Star written by regular contributors were penned by women, up from an already impressive 40% in 2013. In contrast, the percentage of female columnists at both the Ottawa Citizen and the Globe and Mail declined in the same period. From a high of 43% in 2013, the Citizen dropped to 12%.  Meanwhile, female columnists in the Globe dropped from 39% seven years ago to 24% last fall. 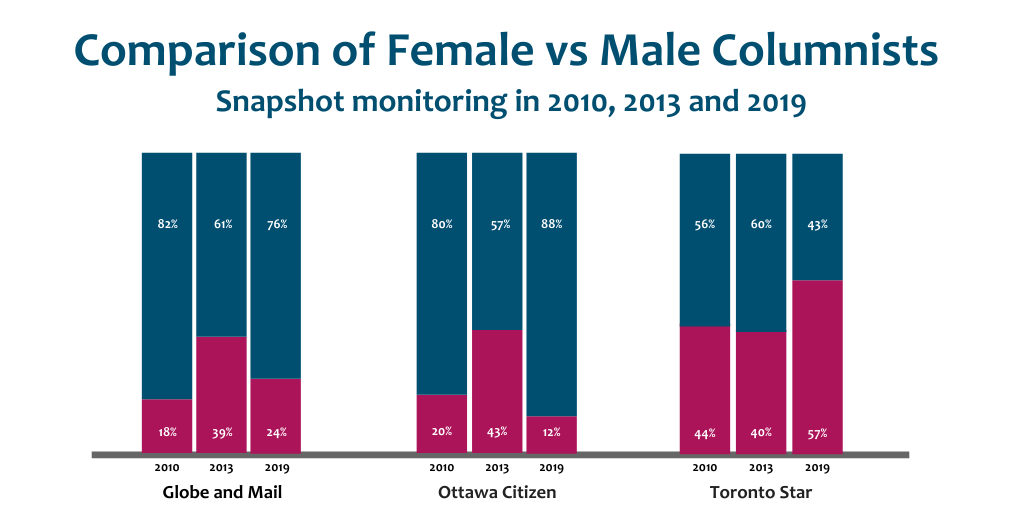 We reached out to the comment section editors of all three papers to share our findings, gain a better understanding of the editors’ goals, and explore what, if anything, we might be able to do to support a more equitable representation of perspectives.

Scott Colby at the Toronto Star responded immediately, offering candid feedback on his process and priorities. Looking at the print version of his paper, he says, makes clear how well the Star is doing in featuring women’s perspectives. Columnists’ bylines are accompanied by thumbnail photos, making it easy to see the gender breakdown. But, he says, he still receives many, many more op ed submissions from men than women, and — given the diversity of Toronto’s population — he’s especially focused on making sure the op eds he publishes reflect the voices of people of colour.

Like Colby, Ottawa Citizen comment page editor, Christina  Spencer, receives many more unsolicited op ed submissions from men than women, but says that when she’s able to commission pieces — seeking commentary on an emerging issue or breaking story — the women she approaches are as likely to say yes as their male counterparts. But Spencer acknowledges that as part of the Post Media chain of papers, The Citizen inherits many of its columnists from The National Post, the vast majority of whom are male.

Although we didn’t receive a response to our query from the Globe, the reduction in female voices on the columnist side may be partly a function of the recent retirement of Margaret Wente, who previously wrote three times a week. (In our 2010 research, her views made up 40% of the female perspective published on the paper’s comment pages.)

The splintering of news audiences means that legacy news media exert less sway over public discourse today than they did a decade ago. However, comment pages and online hubs remain influential. Politicians and policy-makers pay attention to the ideas shared and positions advocated, and broadcast journalists seeking authoritative guests able to provide context for and analysis on timely issues also turn to opinion spaces.

We have argued elsewhere for the importance of ensuring that such spaces — and news coverage more broadly — provide a diversity of perspectives more generally, and better reflect women’s perspectives in particular. It’s encouraging to see the progress reflected in this most recent research.