My first op ed… on the Miss Canada beauty pageant 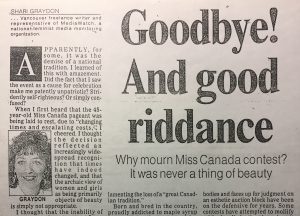 Don’t stop me, even if you have heard this one before:

It’s 1992. I’ve just joined the board of MediaWatch, Informed Opinions’ predecessor. A TV reporter calls to say the Miss Canada pageant has just been cancelled and he needs someone who is not a beauty contestant to come on TV to talk about it.

On the front steps of my Vancouver apartment building, I look into the camera and say how thrilled I am that a contest treating women’s bodies like cattle at an auction is no longer popular enough to attract advertising.

Later, I watch my comment air on TV between ten-second clips of Miss Canada 1990 and Miss Canada 1991. (They do not use colourful analogies so I don’t recall what they said, but they are not celebrating.) Moments after the story runs, my ordinarily supportive mother calls me to say, “Honey, you looked awful!” (For the record, I looked fine. It was January; I was pale. But I suspect the contrast between me and the beauty queens was a bit stark.)

I tell this story often. My punch line is “I don’t tell you this to discourage you from saying ‘yes’ to TV interviews. I tell you because I had way more to talk about than the ten seconds they gave me. So I channelled the rest of what I thought into a 700-word newspaper op ed, which I submitted to the Vancouver Sun. Which they published. And that led to additional interview requests, and speaking opportunities. Which only emboldened me. I started writing more op eds. And I quickly learned that it’s much easier to get people to return your calls, give money to your cause, or make change in the direction you believe in, when you have a public voice.”

This week, in the process of culling my files in advance of a pandemic-inspired move, I came across this op ed — the first of many hundreds of print and broadcast commentaries I’ve written to advocate for a better world for women. How much progress have we made over the past three decades? You be the judge…

This commentary was originally published in The Vancouver Sun on January 9, 1992.

Why mourn Miss Canada contest? It was never a thing of beauty

Apparently for some it was the demise of a national tradition. I learned of this with amazement. Did the fact that I saw the event as a cause for celebration make me patently unpatriotic? Stridently self-righteous? Or merely confused?

When I first heard that the 45-year-old Miss Canada pageant was being laid to rest due to “changing times and escalating costs,” I cheered. I thought the decision reflected an increasingly wide-spread recognition that times have, indeed, changed, and that the archaic view of women and girls as being primarily objects of beauty is simply not appropriate.

I thought that the inability of pageant organizers to attract financial sponsorship demonstrated an awareness on the part of advertisers that associating their products with a socially acceptable skin show had ceased to be savvy marketing strategy.

And I quietly celebrate the fact that the valuation of women on the basis of a very narrow — not to mention unattainable — ideal was finally being exposed for what it was: demeaning, destructive and dehumanizing.

You can imagine my bewilderment when, several hours after beginning my end-of-an-era celebration, my television set began yielding up person-in-the-street interviews with half a dozen patriots lamenting the loss of a “great Canadian tradition.”

Born and bred in the country, proudly addicted to maple syrup and the CBC, and prone to proclaiming “My country includes Quebec,” I was stopped in my nationalist tracks by the implication of this alternative view…

But only for a moment.

Let’s have some perspective here, I thought. Begun in 1946, the Miss Canada pageant was established at a time in which, in at least some parts of the country, women had only just been granted the right to vote.*

Surely the fact that Canada has long ago abandoned such “traditions” is something to celebrate, not lament. The only reason it has taken this long to dismantle the beauty pageant is that until recently, the venture was a very profitable one.

Competitions that put women’s bodies and faces up for judgment on an aesthetic auction block have been on the defensive for years. Some contests have attempted to mollify critics by eliminating the swimsuit category, or asking the contestants their views on the state of the world.

But none of these measures fooled anyone. The young women who enter the contests, the arbiters who judge them, and the audiences who watch the spectacle unfold on national television all know a beauty pageant when they see one.

Meanwhile, back in the bathroom mirrors of the nation, the insidious comparisons continue. Surrounded by media images of coiffed, painted, shaved and airbrushed “unforgettable Revlon women,” at once slim and voluptuous, youthful and worldly, Canadian females are constantly reminded that, in the arena that counts in contemporary culture, most of us just don’t cut it.

But considering that the boardrooms and legislatures of the land, the sports pages and halls of fame, the art galleries and playhouses still show regrettably little evidence of the many significant and diverse contributions of Canadian women, I can’t imagine why we’d want to be wasting energy on the human equivalent of a cow show.

And until women can walk down the street without fearing sexual assault; walk into the workplace without fearing sexual harassment; and walk into the bank with pay cheques that accurately reflect the work performed, there is no place for a “tradition” that keeps reinforcing the unfortunate notion that our value as individuals depends on our ability to measure up to a physical definition of womanhood that is, in fact, inhuman.

A doctor told me last summer that one of the most common forms of major surgery in Vancouver these days is breast augmentation. In the context of the subject at hand, this forces one to ask: are trends like surgical reconstruction for cosmetic purposes, and the growing rate of anorexia in schoolgirls, simply new Canadian “traditions” for the ’90s?

I guess those of us who view the demise of the Miss Canada pageant as a reason to rejoice are just not the traditional type. Some might even call us feminists. Clearly, unable as we are to weep over the dissolution of such traditions, we deserve the label.

However, I like to think that all patriotic Canadians should be proud to declare themselves active participants in the struggle to achieve equal rights for women. Now there’s a tradition worth saluting the flag for.

*At the time I wrote this in 1992, I was ignorant of Canada’s racist voting history, and didn’t know that many women were prevented from exercising their franchise until later.