Storytelling and the power of visual feedback 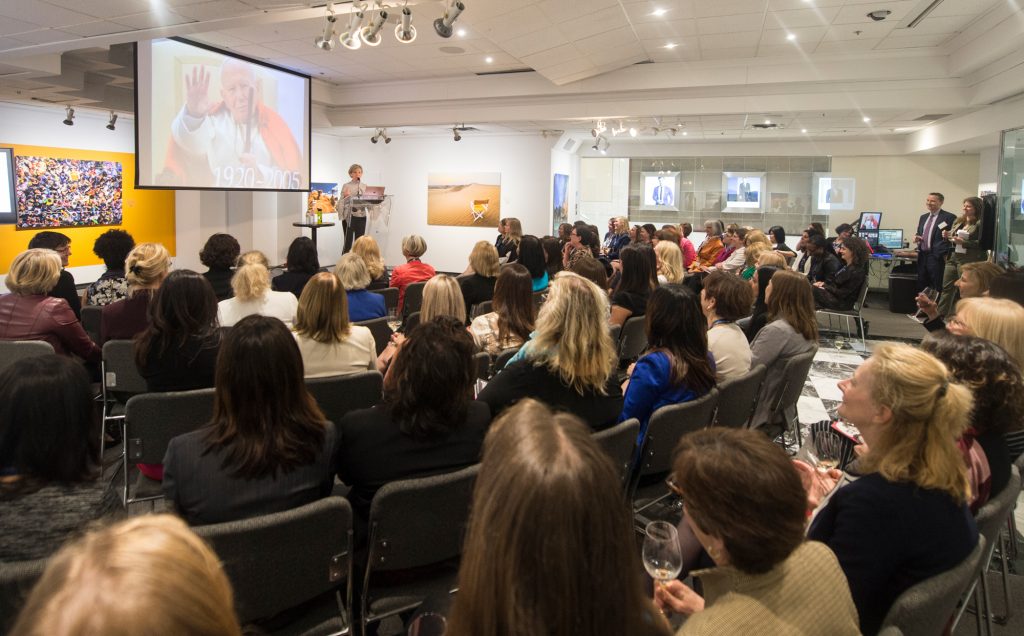 An audience assembled by Odgers Berndtson in Toronto recently listening to a story I rely on to engage right from the beginning and communicate the importance of what we do.

I undermined the impact of my opening.

I relied on my notes too much.

I failed to advance my slides as intended.

Those are just three of the critical observations I made after watching a video of myself delivering a conference keynote in Winnipeg. That’s the bad news.

The good news is that 1. the audience of women in engineering, science, trades and technology didn’t appear to judge me nearly as harshly as I judged myself, and 2. reviewing the unassailable evidence on tape ensures I’ll do better next time.

With the possible exception of Donald Trump, most of us find it discomfiting to watch ourselves speaking. We’re our own worst critics, overwhelmed by our awkward transitions, too-speedy delivery or that weird thing we do with our mouths.

As a result, we rarely subject ourselves to the experience, preferring not to have to think about any aspect of our failure to come across as polished as we’d like.

But the feedback is invaluable, and more than worth the pain.

On the other hand, feedback is even more valuable when you receive it in ADVANCE of your keynote, panel participation or board presentation. That’s why we’re now offering more opportunities for women to participate in small, women-only presentation coaching sessions to help them build their presence, polish their delivery and hone their content. (Spaces still available in May 30th session in Toronto.)

Speaking of which, last week I had the opportunity to meet with a senior businesswoman who is receiving significant recognition for her leadership next month. She’s smart and articulate, accomplished and charismatic.

Not to mention organized: more than 6 weeks in advance of the event where she’ll be speaking, she’d already worked her way through several drafts of her remarks. They were funny and thoughtful.

But between draft 2 and draft 3, she talked herself out of including one of her most interesting stories. I spent time talking her back into keeping it.

They are, hands down, the most interesting and memorable parts of almost every speech you will ever hear. Research backs this up. Whatever data points you share with an audience, they’re 7 times more likely to recall the story that followed or preceded the stats.

We’re wired for stories. They light up more and different areas of our brain than facts alone. And the meaning they deliver creates a sense of connection with the people assembled.

At a cocktail reception at the University of Waterloo last year, I was chatting with a woman I didn’t know. What do you do, she asked. When I told her that I train smart women to share what they know through the media, she could hardly contain her excitement.

“Oh!” she exclaimed: “You have to meet this woman I just heard about… She and her husband were in Montreal and they were walking across the parking lot of a Catholic church when…”

I started to back away from her in horror and disbelief.

Because she was telling me MY story: the one I have used for the past six years to explain why I founded Informed Opinions and make clear to women why they need to speak up when given the opportunity.

How dare she — especially since she neither realized that the story she was telling was attached to me, nor knew the name of the project!

But then I got over myself. I realized that her telling my story – just as my friends and allies over at TVO’s The Agenda say they frequently do – was a marker of success. Because its point is to demonstrate the need for more women’s voices. And when everybody gets that, and is working to achieve the goal of gender parity in public discourse, my job will be done.

Telling a story well is a skill that can be taught. You want to include enough concrete detail to allow your listeners to visualize the scene, but keep the story concise enough that they don’t lose interest.

Relevance is key. How does this particular story relate to these people? What about it will resonate with their experience? Why is the meaning you’re extracting important to them?

You also want the story to be authentic, to describe a real life situation that you or someone you know encountered, and to reflect your own personal sense-making.

For help in learning how to identify and tell powerful stories to increase your impact, your can register for one of our workshops here.