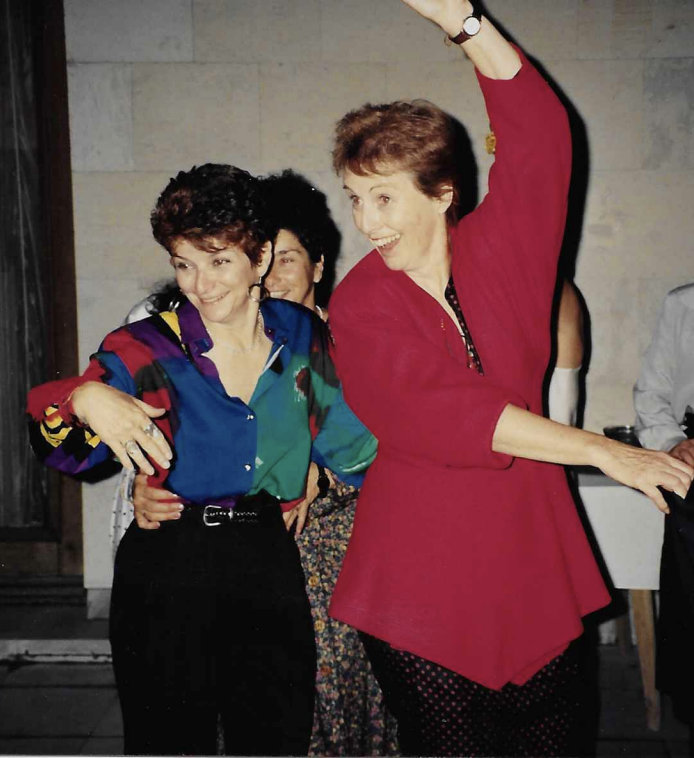 Sylvia Spring, filmmaker and co-founder of MediaWatch dancing with then Executive Director, Meg Hogarth at a women’s event in Bulgaria 1994. Meg died last month in Toronto at 84.

Meg moved quickly behind me to close the door to her office not wanting her staff to overhear.

I had showed up in advance of the MediaWatch board meeting in 1990 to let her know that even though I’d only joined the board six months previously, I would be resigning at this, my second meeting.

When pressed, I confessed my disappointment that some of the other members didn’t seem that engaged. At my first meeting, we’d gone around the table to share what we’d been up to on behalf of the then 10-year-old feminist organization advocating to improve how women were represented in media. More than half of my new colleagues had nothing to say.

Wrapped in my new-convert-to-the-cause fervour, I was appalled. What I saw as both a privilege and pressing responsibility, they seemed to view as a governance obligation to be executed three times a year in exchange for take-out pizza and — if they lived elsewhere — economy class travel to Toronto.

Meg, who’s ballet-master-posture and long patrician face made her seem even taller than the six feet she’d inherited, was also new to her job as Executive Director. She’d taken on the role when the board had moved the organization’s office from Vancouver to Canada’s media centre to better influence the business practices of advertisers, broadcasters and news organizations. 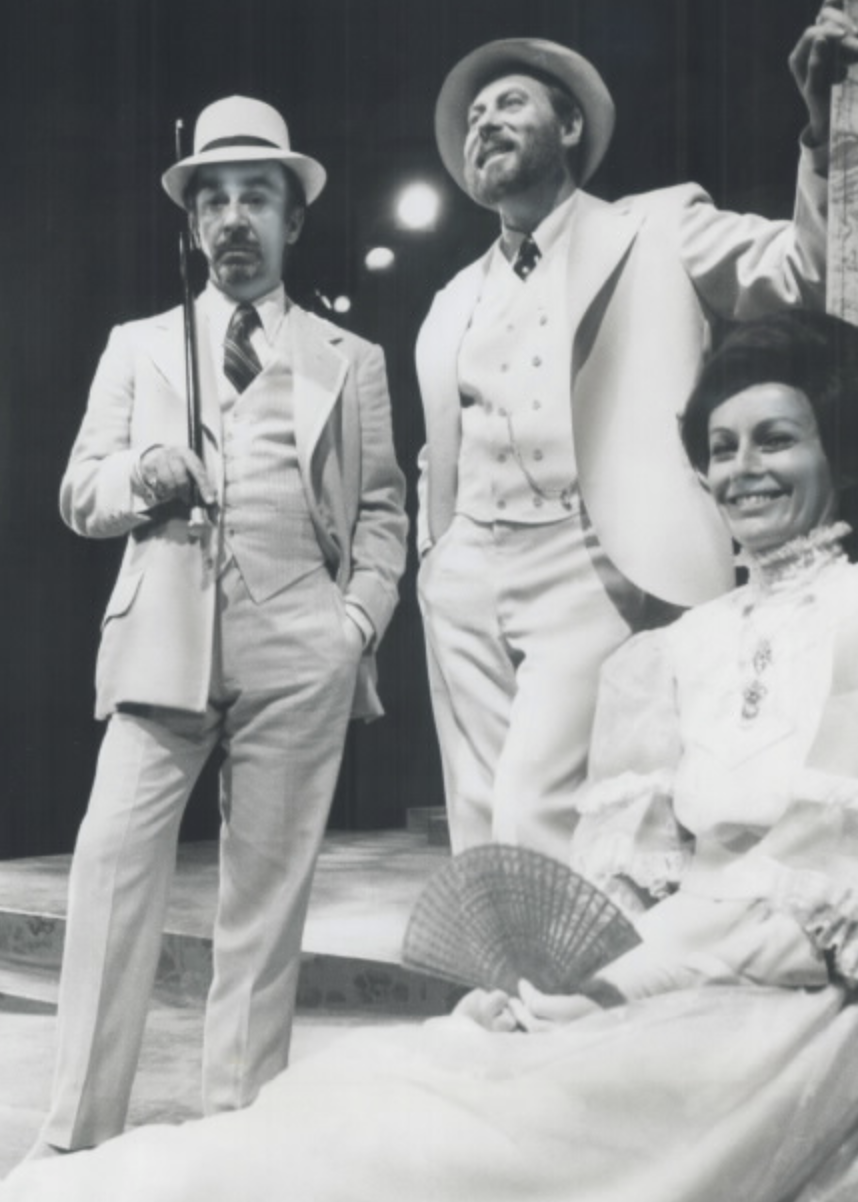 Eric House, David Gardner and Meg Hogarth in a performance of The Cherry Orchard at Hart House in Toronto, 1977

An actor, former president of the Canadian performers’ union, and one-time provincial NDP candidate, Meg modelled what was, for me, an inspiring marriage of activism and art, pragmatism and persuasion. She was bright and energetic, confident and fun.

And she managed to convince me in short order that the conclusion I was drawing to quit the board was entirely wrong; instead of jumping ship, she advised, I should be at its helm. The term of the current president was up and given the leadership I’d already shown — writing op eds, giving public talks and media interviews — she was certain others would be happy to cede the floor to me. (This is one source of the quip I often make in talks: there are no glass ceilings in under-funded women’s organizations.)

That conversation with Meg, which took place 30 years ago, changed the course of my life. Although I’ve done many other things during and after my ten years as chair of that board, three decades later, I remain integrally involved in advocacy work related to the persistent under-representation of women in media.

MediaWatch has morphed into Informed Opinions, and I continue to build on research we did together… share stories about interviews I gave during those years… fuel my commitment with the recognition that while women’s equality has seen extraordinary gains in many arenas, we are still being interviewed, quoted and featured less than a third of the time.

During the period of our collaboration, Meg was generous in passing speaking opportunities and media interviews to me. She would coach me on the phone, offering feedback and sharing ideas that made me a more interesting source and more effective advocate.

Her own commitment to the cause was best illustrated by a meeting she secured with Ted Rogers, founder of the Rogers media empire. As funding cuts in the 1990s began to erode MediaWatch’s ability to deliver programming, conduct research and lobby media, she sought an audience with the empire builder, whom she’d briefly dated many decades before. Even though they hadn’t been in touch for years, and he had no evident history of sharing company profits with women’s organizations, he ran a media empire, and he agreed to see her.

I don’t recall any details of the meeting, only the optics of the encounter as she described them: both of them in their sixties, but Meg dressed in her rag-tag bohemian non-profit aesthetic, having arrived by bike at Rogers’ well-appointed corporate headquarters to meet the business-suited billionaire.

I believe the audience was both perfunctory and fruitless, but I loved her for having had the humility to request it, the strength of character to show up as herself, and the sense of humour necessary to turn the incident into a good story.

Meg Hogarth died last month at 84. Her passing was marked with an obit in The Globe and Mail, which failed to include a photograph. Given her work helping to make women more visible, this was a cruel irony.

Meg had arguably a greater impact on the course of my life and the advocacy I’m still doing than almost anybody. I told her that the last time I saw her in 2016… confessed that I was more invigorated by what had become my life’s work than I ever could have imagined… thanked her for closing the door behind me back in 1990 and painting a leadership vision that I hadn’t previously aspired to assume.

I don’t know how much of what I said was understood. By then her communication abilities were limited by the impact of both Parkinson’s and several strokes. I regret not having made a point to tell her sooner. That’s why I’m telling you.

The next donation I make to the organization’s future will be in her honour.