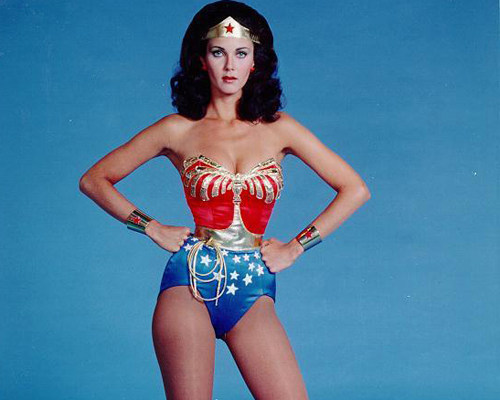 The other day I stood like Wonder Woman for a full two minutes.

I wasn’t reliving a childhood fantasy but preparing to do a short phone interview about our latest research with CJAD 800 Radio in Montreal.

If someone had happened upon me over the course of those two minutes, they certainly would have laughed out loud. For there I stood: hands on hips, chest thrust forward, chin slightly lifted and legs firmly planted on the ground. Ridiculous? Certainly. But effective? You betcha.

If you haven’t seen the TED Talk by social psychologist Amy Cuddy (it’s the organization’s second most popular one ever) allow me to introduce you. Called “Your body language shapes who you are”, the June 2012 talk recently spawned a book called Presence, which I picked up on a recent trip to the public library.

Cuddy promotes what she calls “power posing” – which ultimately just means standing in a confident and outward-focused posture (versus a more folded-in one), even when we don’t actually feel confident. She argues that such stances can affect your brain’s levels of cortisol (stress hormone) and testosterone (dominance hormone), which can ultimately affect our performance.

The evidence is very convincing: in both her talk and in the book, Cuddy explains that when people had to hold high power poses for two minutes as part of a lab experiment, their testosterone levels rose by 20 per cent, and their cortisol decreased by 25 per cent. And the low power posers? After two minutes, their testosterone decreased by 10 per cent, and their cortisol increased by 15 per cent.

And so, when faced with the idea of doing a radio interview in my capacity as Project Manager with Informed Opinions, I decided to test the theory, and I struck a pose.

Don’t get me wrong: I’ve done a fair bit of media in my life, including regular stints on the airwaves when I worked as a producer and reporter with CBC Radio in Halifax and Ottawa. So I wasn’t petrified at the idea of a radio interview, but I still had a few nerves. After all, it would be the first time I was speaking on behalf of Informed Opinions, so I felt an increased sense of responsibility. (And my colleague, Shari Graydon, is practiced and effective at this kind of thing.)

I’m pleased to report that when the call from Montreal came through, I was ready. I was feeling centered and confident, with my mind-map laid out in front of me. Even when the engaging host, Anne Lagace Dowson, threw a few unexpected questions at me, I didn’t hesitate, doing my best to give a balanced response while channeling the conversation back to what I wanted to talk about.

It was all over before I got the chance to say half of what I’d wanted to share, but I felt good about how it had unfolded. When I hung up, I not only felt surprised by how centered I was still feeling, but also by the fact that I’d been actively present for the whole interview. Unlike in the past, I’d noticed that no part of me was second-guessing what I’d said or regretting any aspect of my performance. My inner critic was firmly in-check.

Amy Cuddy’s evidence-supported theory is that our body language really does govern how we think and feel about ourselves – and having experienced it, I can honestly say that I think she’s on to something.

So the next time you’re feeling stressed about something, strike a power pose!

[Psssst: interested in improving your presentation skills? In the Ottawa area? Shari Graydon will be leading her popular workshop, “Building Your Presentation Impact” on Tuesday, April 12, and there are still a few spaces available! More info here…]