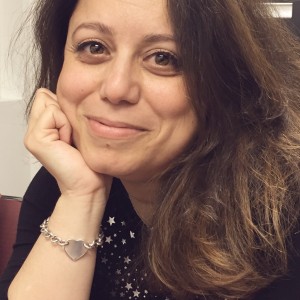 Assistant Professor of Educational Technology in the Department of Teaching and Learning Studies at the Faculty of Education and holder of the Chair in Educational Leadership (CLE) in Innovative Pedagogical Practices in Digital Contexts – National Bank, Université Laval

Nadia Naffi, of Concordia University, is one of the Top 25 finalists in the Social Sciences and Humanities Research Council’s 2017 Storytellers challenge.

Presentation at the Centre for Immigration Policy Evaluation (CIPE), Concordia University: As Syrians were seeking asylum in host countries, online transnational conversations sparked debates between people who wished to accept them and people who rejected them. The unfortunate terror attacks in Europe had ramifications on the resettlement of Syrian refugees across the world, which were largely caused by the outreach of online conversations. The Internet in general and social media in particular facilitated the dissemination of racism and of intolerance. Research on youth and social media claim that youth are influenced by the plethora of messages shared online. They are viewed as victims whose thoughts and behaviours are easily triggered and manipulated by exterior online forces. Through her research, Nadia Naffi argues that host society youth need to be considered as agents of change and key players in the integration and the inclusion of Syrian refugees. Her overarching objective is to develop a thorough understanding of the influence of online content on the integration and the inclusion of newcomers in host societies in order to better prepare host society youth to play their role of agents of change. https://www.concordia.ca/artsci/polisci/events/cuevents/artsci/polisci/2017/the-influence-of-social-media-on-the-integration-and-the-inclusi.html

Cyberbullying at an all-time high: Don’t be a bystander

Faculty of Arts and Science at Concordia University, April 13, 2016Online

How social media shapes attitudes towards refugees Fear-mongering or friendly? A Concordia researcher investigates the fallout from online chatter, and its policy ramifications

Naffi has more than a dozen publications in refereed journals, conference proceedings, book chapters, and book reviews. She has given presentations at scientific conferences, organized panels, offered keynote lectures and invited presentations. Naffi has written opinion pieces which she has published in high impact journals such as La Presse, The Conversation, The Gazette, The Huffington Post, Maclean’s, The National Post, Franceinfotv, Ouest-France. She has given interviews to the media, appeared on TV and radio. She has presented at high-profile events such as at the SSHRC Impact Awards at Rideau Hall, before the Governor General of Canada. She has received several invitations to offer workshops in the context of summer schools and professional development days.

As a doctoral student, she received numerous awards for the excellence of my doctoral research. Her project focussed on how host society youth construe online content about the Syrian refugee crisis after the terror attacks. It addressed how hate, fear, and prejudice spread through social media. She identified a five-step model called Get Ready to Act Against Social Media Propaganda, which can be used in educational contexts to disrupt hate discourses. First, Naffi was funded by the FRQSC and SSHRC and received scholarships from the Department of Education at Concordia University. She was named Concordia Public Scholar in 2017-2018 to represent Concordia University in the media, she was a winner of the SSHRC’s Storytellers national competition, a finalist for Concordia University’s My 180-second thesis competition, a winner of ACFAS’s My Thesis in 3 minutes competition, and won the President’s Media Outreach Award (2016-2017) for excellence in communications. Naffi was awarded the Governor General’s Gold Medal of Canada – Individual and Society 2018 for the excellence of my doctoral thesis.

She is also the recipient of the SALTISE 2019 Best Practices & Pedagogical Innovators Award.

As Chairholder, Naffi is interested in pedagogical innovation in digital contexts as well as competencies development for the future of work. Her research focuses on:

The ethical, critical, responsible and sustainable application of disruptive technologies such as artificial intelligence in education, training, talent development and upskilling and reskilling of the future and current workforce for the future of work;
The intergenerational, interdisciplinary and intersectoral inclusion and integration of the current and future workforce in tomorrow’s labour market;
The co-existence in the digital and AI era through which humans and machines collaborate to facilitate and develop collaborative intelligence and humans’ augmented intelligence;
Digital citizenship to combat online misinformation.

Concordia’s Newsmaker of the Week | Professional

The Centre for Immigration Policy Evaluation (CIPE) at Concordia University

EILAB - An International Centre of Innovation in Digital Learning at UOIT

National and International Conferences and Congresses