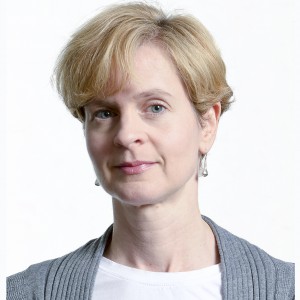 Professor of Physics, Department of Physics and Astronomy, York University

Wendy Taylor searchs for exotic particles with the ATLAS experiment at the CERN Large Hadron Collider.

In the summer of 2016, rumours about the discovery of a new particle were squashed when the LHC announced that the signal disappeared after collection of more higher energy data.

Matter-antimatter imbalance observed in B meson decays to muons

The hunt for the truest north

Particle Physics and its Cosmological Implications

Discussion about the Large Hadron Collider and the search for the Higgs Boson and dark matter. 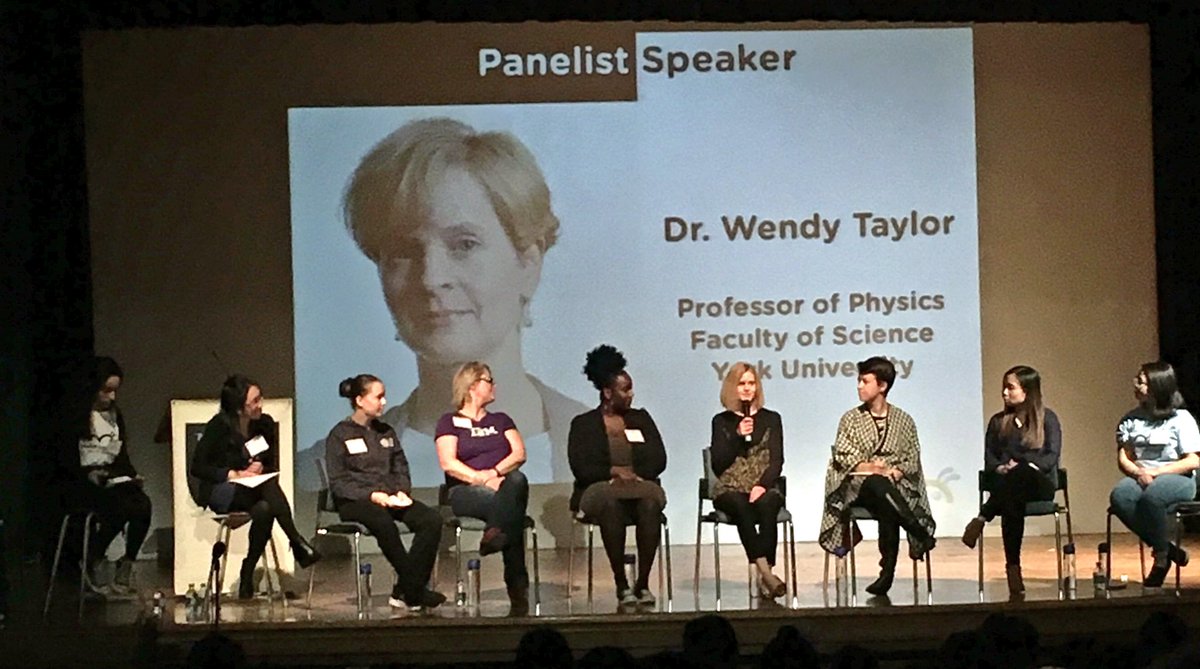 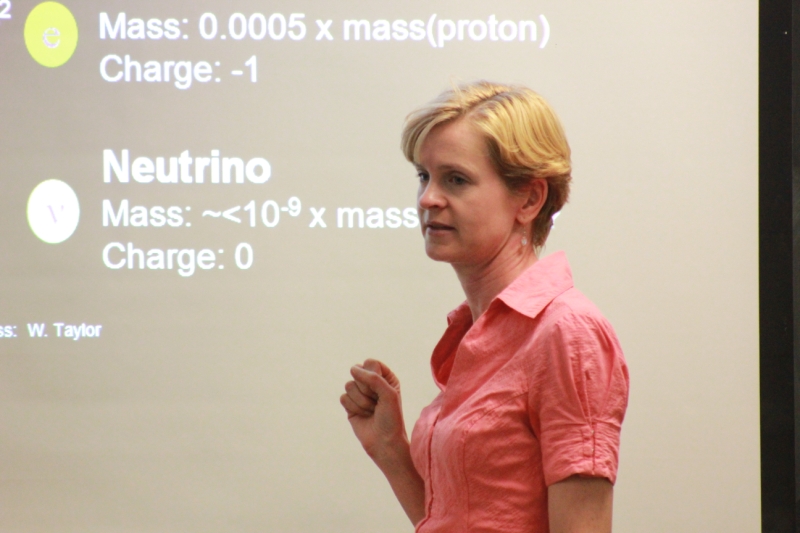 Search for CP violation in B0s→μ+D−sX decays in ppbar collisions at sqrt(s)=1.96 TeV

We have performed a search for CP violation in a sample of B0s→μ+D−sX decays corresponding to 5  fb−1 of proton-antiproton collisions collected by the D0 detector in Run II at the Fermilab Tevatron Collider. New physics in B0s mixing could contribute a significant CP violating weak phase, which would be observed as a difference in the decay-time distribution for B0s→anti-B0s oscillated states versus that for anti-B0s→B0s. A fit to the decay-time distributions of the B0s/anti-B0s candidates yields the flavor-specific asymmetry asfs=[−1.7±9.1(stat)+1.4−1.5(syst)]×10−3, which excludes CP violation due to new physics within the experimental sensitivity.

A search for highly ionising, penetrating particles with electric charges from |q|=2e|q|=2e to 6e is performed using the ATLAS detector at the CERN Large Hadron Collider. Proton–proton collision data taken at sqrt(s)=7 TeV during the 2011 running period, corresponding to an integrated luminosity of 4.4 fb−14.4 fb−1, are analysed. No signal candidates are observed, and 95% confidence level cross-section upper limits are interpreted as mass-exclusion lower limits for a simplified Drell–Yan production model. In this model, masses are excluded from 50 GeV up to 430, 480, 490, 470 and 420 GeVfor charges 2e, 3e, 4e, 5e and 6e, respectively.

A search is made for massive highly ionising particles with lifetimes in excess of 100 ns, with the ATLAS experiment at the Large Hadron Collider, using 3.1 pb−1 of pp collision data taken at sqrt(s)=7 TeV. The signature of energy loss in the ATLAS inner detector and electromagnetic calorimeter is used. No such particles are found and limits on the production cross section for electric charges 6e⩽|q|⩽17e6e⩽|q|⩽17e and masses 200 GeV⩽m⩽1000 GeV200 GeV⩽m⩽1000 GeV are set in the range 1–12 pb for different hypotheses on the production mechanism.

A search for highly ionizing particles produced in proton-proton collisions at 8 TeV center-of-mass energy is performed by the ATLAS Collaboration at the CERN Large Hadron Collider. The data set used corresponds to an integrated luminosity of 7.0  fb−1. A customized trigger significantly increases the sensitivity, permitting a search for such particles with charges and energies beyond what was previously accessible. No events were found in the signal region, leading to production cross section upper limits in the mass range 200–2500 GeV for magnetic monopoles with magnetic charge in the range 0.5gD

This Letter presents a search for magnetic monopoles with the ATLAS detector at the CERN Large Hadron Collider using an integrated luminosity of 2.0  fb−1 of pp collisions recorded at a center-of-mass energy of √s=7  TeV. No event is found in the signal region, leading to an upper limit on the production cross section at 95% confidence level of 1.6/ϵ   fb for Dirac magnetic monopoles with the minimum unit magnetic charge and with mass between 200 GeV and 1500 GeV, where ϵ is the monopole reconstruction efficiency. The efficiency ϵ is high and uniform in the fiducial region given by pseudorapidity |η|

The theoretical motivation for exotic stable massive particles (SMPs) and the results of SMP searches at non-collider facilities are reviewed. SMPs are defined such that they would be sufficiently long-lived so as to still exist in the cosmos either as Big Bang relics or secondary collision products, and sufficiently massive such that they are typically beyond the reach of any conceivable accelerator-based experiment. The discovery of SMPs would address a number of important questions in modern physics, such as the origin and composition of dark matter and the unification of the fundamental forces. This review outlines the scenarios predicting SMPs and the techniques used at non-collider experiments to look for SMPs in cosmic rays and bound in matter. The limits so far obtained on the fluxes and matter densities of SMPs which possess various detection-relevant properties such as electric and magnetic charge are given.

A measurement of the Bs0 decay parameters in the Bs0 → J/ψϕ channel using an integrated luminosity of 14.3 fb−1 collected by the ATLAS detector from 8 TeV pp collisions at the LHC is presented. The measured parameters include the CP -violating phase ϕs, the decay width Γs and the width difference between the mass eigenstates ΔΓs. The values measured for the physical parameters are statistically combined with those from 4.9 fb−1 of 7 TeV data, leading to the following: ϕs=−0.090±0.078(stat.)±0.041(syst.)rad ΔΓs=0.085±0.011(stat.)±0.007(syst.)ps−1 Γs=0.675±0.003(stat.)±0.003(syst.)ps−1. In the analysis the parameter ΔΓs is constrained to be positive. Results for ϕs and ΔΓs are also presented as 68% and 95% likelihood contours in the ϕs-ΔΓs plane. Also measured in this decay channel are the transversity amplitudes and corresponding strong phases. All measurements are in agreement with the Standard Model predictions.

We report results of a study of the B0s oscillation frequency using a large sample of B0s semileptonic decays corresponding to approximately 1  fb−1 of integrated luminosity collected by the D0 experiment at the Fermilab Tevatron Collider in 2002–2006. The amplitude method gives a lower limit on the B0s oscillation frequency at 14.8  ps−1 at the 95% C.L. At Δms=19  ps−1, the amplitude deviates from the hypothesis A=0 (1) by 2.5 (1.6) standard deviations, corresponding to a two-sided C.L. of 1% (10%). A likelihood scan over the oscillation frequency, Δms, gives a most probable value of 19  ps−1 and a range of 17

We present a study of the performance of Birks' Law in liquid argon ionization chamber simulations as applied to highly ionizing particles, such as particles with multiple electric charges or with magnetic charge. We used Birks' Law to model recombination effects in a Geant4 simulation of heavy ions in a liquid argon calorimeter. We then compared the simulation to published heavy-ion data to extract a highly ionizing particle correction to Birks' Law.

As an undergraduate UBC physics student, Wendy Taylor spent several co-op terms at TRIUMF, Canada's national particle and nuclear physics laboratory. She was doing research for a rare kaon decay experiment located at Brookhaven National Laboratory (USA) and became fascinated by particle physics. Taylor's PhD thesis at the University Toronto comprised a study of composite b-quark particle formation using the CDF experiment at Fermilab (USA). As a postdoc employed by SUNY Stony Brook (USA) working on the D0 experiment at Fermilab, Taylor helped build and commission custom-designed electronics to identify b-quark particles in real time. In 2004, she returned to Canada to hold a Canada Research Chair in Experimental Particle Physics at York University (Toronto). As such, she led the D0 team that first observed evidence of the particle-antiparticle transformations of Bs mesons (composite particles with b and s quarks). Taylor joined the ATLAS experiment at the LHC, the world's highest energy particle accelerator. Her current research focuses on the search for the magnetic monopole, a hypothetical particle with only a north or south magnetic pole. Throughout my career, Taylor has been engaged in science outreach to the public and to government agencies. She is an advocate for women in physics and for equity for all within science, academia and society as a whole.

Ontario Ministry of Research and Innovation, 2008-2011

TRIUMF Board of Management, Member

Unlocking the Mystery of Mass: The Search for the Higgs Boson

Royal Canadian Institute for the Advancement of Science Lecture

Royal Canadian Institute for the Advancement of Science Gala

The Science of Science Fiction Series

Antimatter: From the Subatomic to the Cosmological Scales

Upgrades to the ATLAS Detector at the LHC

The ATLAS Experiment at the CERN LHC

D0: Physics at the Energy Frontier