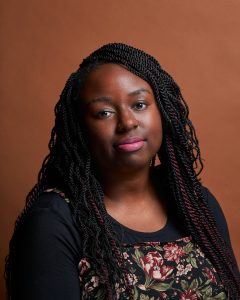 Born in Montreal and of Haitian origin, Kharoll-Ann Souffrant is a social worker and speaker. She is a doctoral student at the University of Ottawa and a Vanier scholarship recipient. Her thesis focuses on sexual violence experienced by Black women in Quebec in connection with the #MoiAussi (#MeToo) movement of 2017 and #AgressionNonDénoncée (#BeenRapedNeverReported) movement of 2014. Kharoll-Ann holds a bachelor’s and master’s degree in social work from McGill University and a college diploma in Youth and Adult Correctional Intervention from the Collège Ahuntsic. She has worked as a volunteer, counsellor and social worker with populations with a variety of psychosocial difficulties as well as in the health and social services network.

In recent years, Kharoll-Ann has become particularly known for her activism against sexual violence against women and for promotion of mental health. She has been a sought after speaking since 2015. Kharoll-Ann is regularly called upon to participate in the media on themes related to her areas of expertise. Since 2020, she is a columnist for À Babord, a journal of politics and social movements. She is currently writing her first essay to be published in 2021 with Les Éditions du remue-ménage.

For her commitment, Kharoll-Ann has received some twenty community and university awards including the Young Woman of Distinction award from the YWCA of Montreal, the Terry Fox Humanitarian Award and the Relève award from the Order of Social Workers of Québec. She was named one of the most distinguished personalities of 2016 by the Journal de Montréal and ELLE Québec magazine. Winner of Black History Month in 2020, Kharoll-Ann was included in a list of 100 Black women to watch across the country published on the occasion of the Canada International Black Women Event. She is now an Action Canada Fellow for 2020/21.

Often described as a quiet force, Kharoll-Ann aspires to a career in teaching and university research in social work. Through each of her actions, she fervently wishes to embody the adult she needed when she was younger, for the greatest number of people.

by the YWCA of Montreal.

Terry Fox Humanitarian Award recipients are selected for their dedication to the humanitarian ideals of Terry Fox, their courage in overcoming obstacles, and definite marks of distinction and persistence in the pursuit of excellence in academic, athletic, and civic life.