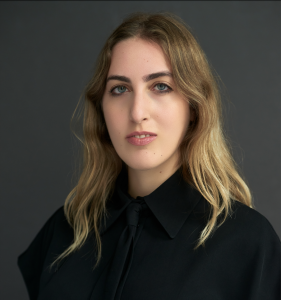 In this video, MLI's Director for the Centre for Advancing Canada's Interests Abroad, Shuvaloy Majumdar, was joined by Sarah Teich to discuss Teich's paper.

Hundreds of thousands of deaths and trillions of dollars in economic damages could have been prevented had countries like China and Iran not engaged in illegal cover-ups and obfuscations regarding the COVID-19 pandemic.

By withholding critical public health information, silencing whistleblowers, delaying containment measures, and sacrificing the health and safety of their citizenry in favour of maintaining power and stability, China and Iran have allegedly violated numerous international and domestic legal obligations.These regimes can and should be held to account, and countries like Canada have a wide range of domestic and international tools at their disposal for doing just that.

This episode of Pod Bless Canada features a conversation between MLI’s Director for the Centre for Advancing Canada’s Interests Abroad, Shuvaloy Majumdar, and Sarah Teich, a Canadian attorney and consultant who is the author of the Institute’s most recent paper titled “Not Immune – Exploring liability of authoritarian regimes for the COVID-19 pandemic and its cover-up.”

Teich’s paper argues that hundreds of thousands of deaths and trillions of dollars in economic damages could have been prevented had countries like China and Iran not engaged in illegal cover-ups regarding the COVID-19 pandemic. Luckily, Teich outlines that there are a wide array of domestic and international legal tools available to hold regimes like China and Iran to account.

Majumdar and Teich explore the paper and what the next moves are for policy makers as they consider state liability for the COVID-19 pandemic.

Don’t turn away from China’s ongoing genocide of Uighurs

OPINION: Hold China and Iran accountable for their cover-ups

China was in violation of International Health Regulations. What do we do now?

Would the International Criminal Court prosecutor opening an investigation into Palestine be a good idea? 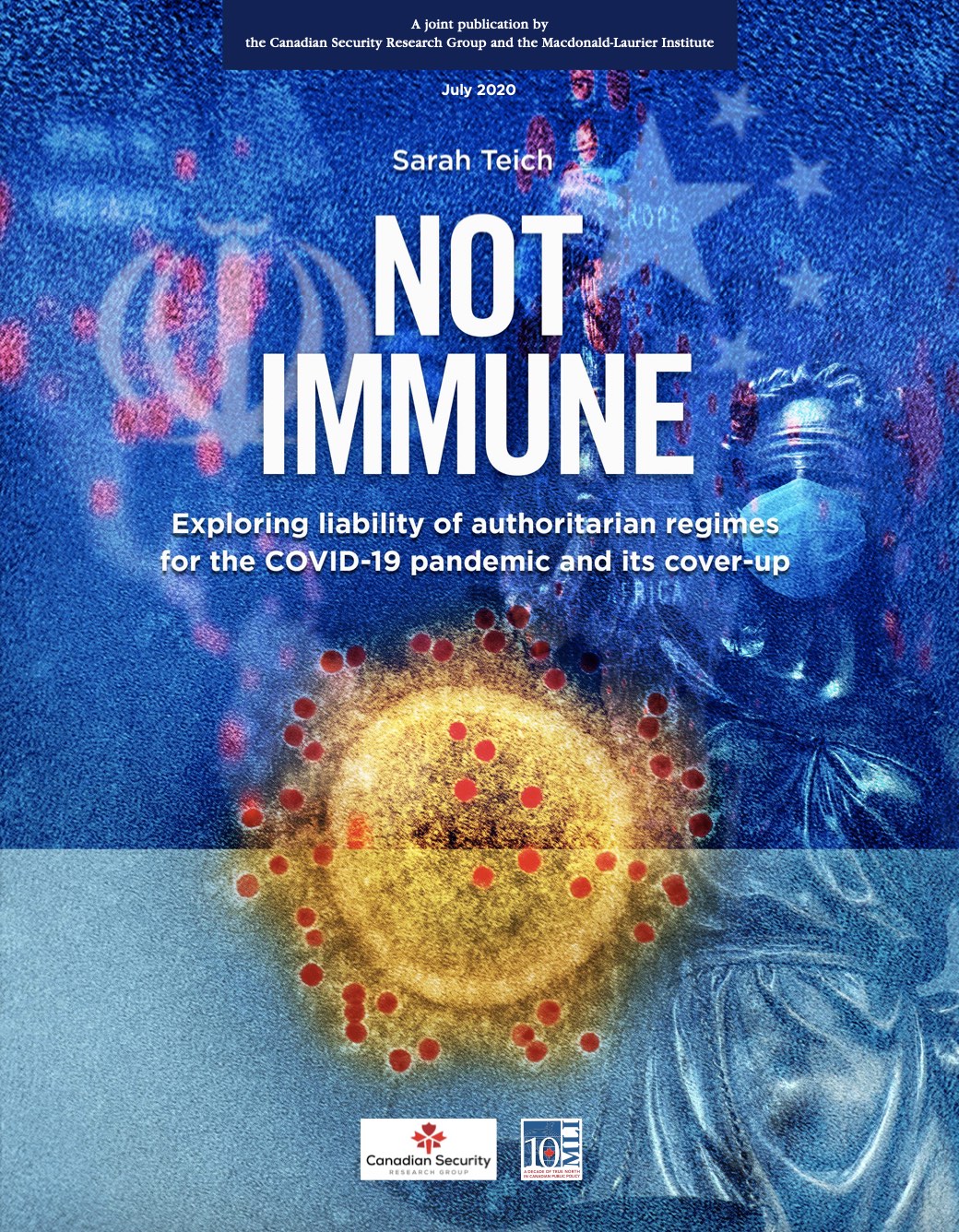 Not Immune – Exploring liability of authoritarian regimes for the COVID-19 pandemic and its cover-up,

Simply put, Teich, an expert in human rights and security law, demonstrates that we can take them to court (or use other avenues of recourse) for global crimes including abusing human rights, subverting human health, suppressing information, and likely causing the deaths of hundreds of thousands of people and trillions of dollars in economic damage. We can also seek compensation.

Just this week, it was reported that Chinese virologist Dr. Li-Meng Yan fled to the US after alleging that Beijing actively withheld research critical to understanding COVID-19, concealed the extent of the outbreak, and silenced whistleblowers. These serious allegations add to a large body of evidence of the regime's deliberate mishandling of the pandemic at its outset which likely contributed greatly to its global spread.

The Iranian government also reportedly buried evidence, intentionally underreported data, and sacrificed the health and safety of its citizens in favour of maintaining power and stability.

According to Teich, “the Chinese and Iranian regimes likely breached their international legal obligations in a number of key international agreements,” as a result of their cover-up activities, including “the International Covenant on Economic, Social, and Cultural Rights (ICESCR), the World Health Organization’s International Health Regulations (IHR)," and more.

Canada and other governments have a wide array of legal avenues that could be pursued to seek accountability from China and Iran. As the author explains, these avenues include “the UN Office of the High Commissioner for Human Rights, the Director-General of the WHO, the International Criminal Court, and the UN Security Council, respectively.”

Countries could also seek accountability through organizations like the International Court of Justice, the Permanent Court of Arbitration (PCA), or in China’s case, the World Trade Organization dispute resolution mechanism. Bilateral investment treaties may similarly be used.

Accountability could also be sought in the Canadian and US domestic legal systems. In the Canadian case, this could include suing China or Iran in domestic courts; seeking accountability from Chinese and Iranian corporations under the Quarantine Act; imposing economic sanctions on China and Iran using the Special Economic Measures Act; sanctioning officials under the Sergei Magnitsky Law; and passing novel legislation to specifically address liability for COVID-19.

In total, Teich finds more than a dozen ways that the Chinese and Iranian regimes can, and should, be held to account.

In his foreword, internationally respected human rights lawyer David Matas writes that "with any wrongdoing, the sooner those responsible are held responsible, the greater the deterrent and prevention effect. Immunity is a licence for repetition."

“The priority of governments right now is on public health and security, as it should be,” states Teich. “But accountability for the pandemic should be our next priority.”

Published by International Institute for Counter-Terrorism

Belgium has become a major hotbed for radicalization in Europe. At least 380 Belgians have travelled to Syria as foreign fighters, giving Belgium the largest number of jihadists per capita at 33.9 fighters per one million residents. Radicalized Belgian Muslims are significantly involved not only in terrorist attacks in Belgium, but throughout Europe. What has caused Belgium to become this fertile a ground for Islamic radicalization?

This paper points to the low levels of employment, high levels of discrimination, low educational achievement, poor integration, and inconsistent governmental funding pervasive among the Belgian Muslim community. These poor demographic realities of the Belgian Muslim community might be significant in providing a fertile ground for radical Islamic parties and organizations to influence and recruit.

This paper analyzes Islamic radicalization in Belgium. The first part of this paper examines Belgian-Muslim demographics, including population, integration, political participation, and organization. Then, Belgian Islamic radicalization is examined through the theoretical frameworks of both McCauley and Moskalenko and Social Movement Theory. To conclude, this paper considers governmental responses and recommendations for future preventative actions.

Trends and Developments in Lone Wolf Terrorism in the Western World

Published by International Institute for Counter-Terrorism

This paper reviews current literature on the recent and growing phenomenon of lone wolf terrorism. It aims to add data to this subject by analyzing trends and developments using a dataset created using RAND, START, and LexisNexis Academic databases. Analysis of the dataset clarifies five (5) finding trends:

To complement these findings, five case studies from the dataset are examined in-depth. These were chosen for their significance in terms of high rates of fatality or injury. The case studies are shown to be consistent with previous research themes, including psychopathology, social ineptitude, the facilitating role of the Internet, and a combined motivation of personal grievances and broader radical Islamic goals in the process of Islamic self-radicalization.

Sarah Teich is a Canadian attorney, consultant, and author based in Toronto, Canada. She is legal advisor to the Canadian Coalition Against Terror (C-CAT) and the Canadian Security Research Group (CSRG). She is an editorial board member of the International Counter-Terrorism Review Journal, and a senior fellow at the Macdonald-Laurier Institute.

Teich holds a Juris Doctor degree from the University of Toronto Faculty of Law, an M.A. (magna cum laude) in Counter-Terrorism and Homeland Security Studies, and an undergraduate degrees in Psychology and Sociology from McGill University. She has also studied law at the National University of Singapore. Teich has held research positions at the Munk School of Global Affairs (Toronto) and at the International Institute for Counter-Terrorism (ICT) in Israel. She has worked on classified projects for the International Criminal Court (ICC) in The Hague and led a Canadian National Security Working Group delivering policy submissions to the Parliament of Canada. Her current research focuses on international human rights law and national security law and policy.