“Where, oh where, are all the female guests?” 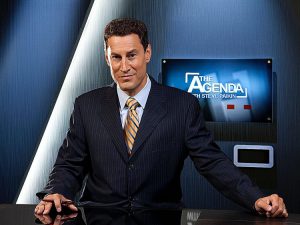 Most parents agree on at least one thing: they’d do almost anything for their children. For Steve Paikin, that means promoting a more gender-equitable media landscape.

Many know Paikin as the host of The Agenda, TVO’s flagship current affairs program which airs in Ontario on weeknight evenings. Others may be familiar with his work moderating federal and provincial election debates.

But what many will not know is that Paikin’s 13-year-old daughter has profoundly shaped his views, particularly around gender representation.

“I don’t want her growing up in a world where she thinks wisdom only comes in a male package – where it’s only men who know stuff,” he said recently. “That’s why I care about this.”

An incident in his own home first gave him pause. Paikin and his wife had invited some friends over for dinner. Introducing his then-8-year-old daughter to two just-arrived guests (a man and a woman), Paikin mentioned that one of them was a former Ontario cabinet minister. Before he had even finished his sentence, however, his daughter had walked over to the male guest with her hand out.

“Here’s an 8-year-old girl who somehow thinks that when I introduce her to a person of authority, it must be a man,” he explained with palpable frustration. “She was getting these cues from somewhere. It reinforced the notion that we need to do everything we can [to change things].”

For Paikin, it meant taking the issue back to his own newsroom, encouraging his colleagues and challenging himself to do better at recruiting female guests for his program.

It wasn’t as easy as he had hoped.

And so in March of 2014, Paikin vented his frustration in a blog post about not being able to find enough expert women.

“Where, oh where, are all the female guests?” he asked in exasperation.

Most of those who responded to him at the time were furious, blasting Paikin for not trying hard enough to find qualified women, and for dismissing some of their legitimate reasons for declining requests. [Informed Opinions’ own Shari Graydon provided context for this, based on survey responses from hundreds of women.]

“It was not meant as an accusatory polemic!” he laughs, thinking back on trying to book a program on provincial affairs for which he wanted to feature only female guests.

“I probably contacted 25 women to try and book five female guests and got no from all of them,” he says. He finally gave up and called some male experts. “All of the men within a matter of minutes, got back to me and said ‘I’m in’.”

That’s one of the reasons we’re building expertwomen.dev/FemmesExpertes.ca – a database of women with informed opinions who are willing and able to say “yes” when journalists call. Our goal: to make “but we couldn’t find any expert women” obsolete! (Contact us if you’d like to be listed.)

As for Paikin, he and his team, which includes Executive Producer Stacey Dunseath, are pleased to report that The Agenda is now leading the pack when it comes to including women’s voices and expert opinions: between 43 and 46 per cent of the program’s guests are female, making it one of the country’s best when it comes to representing the audience it serves.

“Despite the obstacles, we’re doing what we can to make that happen,” Paikin says. “And the good news is, we’re winning.”