Cry if you want to: Anatomy of a 15-minute high-stakes keynote 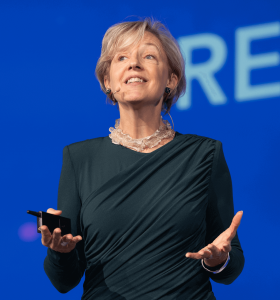 I don’t recommend crying on stage if you can avoid it. So I didn’t. But I wanted to.

Last month, I got to deliver a 15-minute TED-style talk to a global leadership conference hosted by the International Women’s Forum. The IWF’s 1100-plus attendees were assembled in a cavernous Toronto hotel ballroom featuring massive screens designed to ensure that the women at the back of the venue could see me, and the women at the front could count my pores.

It was the most intimidating audience and set-up I’d ever encountered – but I knew that ahead of time, because in order to secure one of three “Ideas Remaking the World” spots on stage, I’d watched videos of some previous winners.

That’s why, even though I generally operate on a “just-in-time” delivery schedule, building my deck the week leading up to a speech (and sometimes, it must be admitted, the night before), I began crafting my remarks in August. Because it’s much harder to write and deliver a compelling 15-minute speech than it is to meander through your content in two or three times that amount of time, which is what I usually have.

I had a very particular purpose for this keynote: I’ve been running Informed Opinions for 10 years, and we’ve had significant impact, but change isn’t happening fast enough. And so we were thrilled to collaborate with researchers at Simon Fraser University to build the Gender Gap Tracker. Its innovative big data analytics measure in real time how many women versus men are being featured as sources in Canada’s most influential news media. It’s designed to incentivize journalists to track their own gender representation, and work harder to achieve parity.

My aim in speaking to the IWF audience was to enlist members’ support in introducing us to potential partners who might have an interest in adapting the tool to measure women’s perspectives in media elsewhere, and increase gender equality in the news internationally. And I was also hoping to generate additional speaking engagements because, at the moment, the fees we charge for workshops and keynotes are the only thing that keeps us going.

Informed Opinions doesn’t charge women to be included in the database, or journalists to use it, but maintaining it, and promoting the women it features, costs money. And if we had additional resources, we could be mining the Gender Gap Tracker’s data for so many additional insights into how Canadian media represent women’s perspectives. I wanted to inspire those present to seek out future opportunities for us to collaborate in ways that will help sustain our work.

My 15 minutes in the spotlight were an exhilarating experience – an advocate’s version of the Olympics. In fact, I had a clock at my feet, counting down the seconds, reminding me that even if my stories landed, I’d have to choose between talking over the laughs or running out of time. I ended my last bit of spoken word just as the numbers hit zero, and turned around to the table behind me for some water. When I turned back, the women in the room were on their feet.

That’s when I wanted to weep — at the indefensible injustice of it being 2019 and living in a world that still too often silences voices that are critically necessary to the survival of the planet we share. That Informed Opinions’ message resonates even in a room of 1100 incredibly accomplished and unusually privileged women who have probably been heard so much more often than most of our sisters speaks volumes of how much work we have yet to do.