Frances McDormand and my Oscar fantasy: the Unvarnished Truth of Women’s Faces 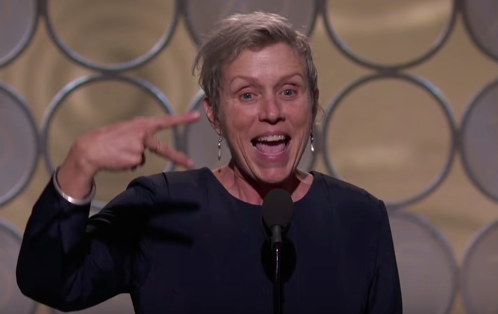 Golden Globe winner Frances McDormand reminding people that the women in Hollywood are there for the work, not the food.

When Frances McDormand accepted her Golden Globe in January, her dramatic performance in Three Billboards Outside of Ebbing, Missouri wasn’t the only thing that made her stand out. At a Hollywood party populated by women poured into form-fitting dresses, precariously balancing on pain-inducing stilettos, and sporting elaborate make-up, her comfortable clothing and relative lack of adornment served as a dramatic contrast.

I so admire the courage it takes, despite enormous cultural pressure, to opt out of the second competition faced by the women in her industry, whether on a set, at an awards dinner, or (sadly) walking their dog. It’s a contest that even the most invested will eventually lose when plastic surgery and regular botox injections can no longer support the illusion of youth.

Though my appearance doesn’t have remotely the same impact on my ability to get work, like every woman I know, I still understand the pressure that female actors face. Although most days, I use few, if any cosmetics, when I visit a TV studio for an interview and am offered the services of a professional make-up artist, I always accept.

(And yet, having done so, occasionally when I watch the televised interview afterwards, I am distracted by the stuff all over my face, and the extent to which I look less like a younger, more attractive version of myself, and more like someone else entirely.)

Years ago, I asked my partner whether he resented having to package his funny, creative and alternative self in a conservative business suit and tie every day. He responded pragmatically, referring to the clothing that allowed him to fit in and earn his salary as “protective coloration”.

Even though I’m essentially self-employed, I spend more time than I care to admit stressing over my own forms of “protective coloration”, wondering if my clothing, hair, or age will be a source of distraction for the people in the audience I’m booked to address. As I wrote in a previous post, I dress to be heard. (Because what is the point of having a platform otherwise?)

On the days when I do stand in front of a mirror for the extra five minutes required to apply enough eye make-up to stop people from asking me if I’m tired, I think about how even such small acts of appearance modification are, themselves, potentially harmful – if only because they can’t help but remind us of the pervasive social forces that condition us to judge one one another without such ministrations.

What kind of self-talk typically accompanies the ritual? I suspect very few of us approximate the unequivocal positivity expressed by Jessica, the blonde-haired, four-year-old viral video star who stood on her bathroom counter and declared how much she liked everything about herself and her life. But what if we worked at channeling her energy and perspective more often? Would this make it easier to resist the cultural pressures and assert the confidence and individuality that were written all over McDormand’s beautiful face?

Maybe if more of us are willing and able to do that, it will become easier for all of us to forgo some of the hours of labour and billions of dollars we collectively spend every year, striving to fit in and live up to literally unattainable appearance standards.

So here’s my Oscar fantasy: imagine if, after the dramatic #TimesUp statement made by Hollywood stars sporting black at the Golden Globes, the glitterati eschewed several layers of that glam and revealed their relatively unvarnished selves at the 2018 Academy Awards.

(I’m not holding my breath, but a woman can dream, right?)