How to rescue yourself from a poor introduction 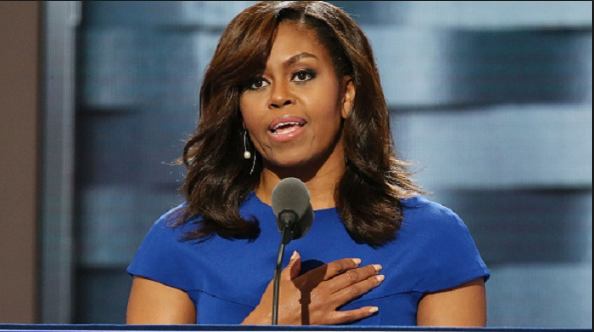 American First Lady, Michelle Obama, pictured here at the 2016 Democratic convention, where she gave a magnificent speech, needs no introduction (a luxury most of us don’t have).

Three times in recent weeks, women I know and respect have declared, in conversation or in print, “I’m really good at what I do.”

In all cases, I knew them to be stating the truth. And because a part of what Informed Opinions does is remind women of the importance of owning their expertise, I salute their confident assertions.

The problem is that such bold declarations still make many listeners or readers squirm. When someone makes unequivocal claims about their capabilities, even when they’re completely defensible, it strikes us as déclassé. (Especially, it must be acknowledged, if the speaker or writer is female.)

“Shouldn’t you leave it to others to publicly celebrate your brilliance?” is a common, if unspoken, response. And of course, independent endorsements are generally more persuasive.

But women in particular are often in situations where, if we don’t make clear our competency, it will go unrecognized. So the challenge becomes how to communicate qualifications or accomplishments without sounding smug and self-aggrandizing. Often the best way to do that — whether in an email, written proposal, or verbal presentation — is to adopt the kind of approach that writing instructors encourage in aspiring novelists: “Show, don’t tell.”

Much more effective than bald statements of your competency are the slipped-in references to your experience or impact. Integrating your claim to fame into some other context allows you to deliver the message without actually sounding like the world’s most narcissistic billionaire. For example…

… allows you to cite to your decades of experience in an organic way. Similarly…

Dozens of our (clients, students…) have succeeded in applying this approach…

… gives you an opportunity to talk about impact by invoking the success of others.

Earlier this year, a client introduced me to her colleagues at the start of a workshop she’d hired me to deliver. With the best of intentions, she described me as “one of Canada’s most influential speakers.” I cringed at her vague and indefensible hyperbole, which seemed much worse than no introduction at all.

I could practically see the sceptical thought bubbles above the heads of the assembled scholars:

“Really? If this woman is so influential, how come we’ve never heard of her before?”

However, I frequently speak in contexts where a formal introduction isn’t on the agenda, so I’ve had lots of practice sharing my credentials without the benefit of an effective host. This is a valuable tool whenever you’re at the front of the room. You don’t want to feel dependent on, or sidelined by, an absent, harried or inexperienced person who may constitute an audience’s first impression of your qualifications.

One effective strategy is to tell a mildly self-deprecating story right off the top that uses humour to relax the audience (and, not incidentally, you), while making clear one or more of the following:

A story I frequently tell at my own expense allows me not only to achieve the first three goals, in under a minute, but also to bridge to content that demonstrates number four. And the thing about stories (more on this in a future blog post) is that they’re better at triggering emotional response, and — as a result — much more memorable than data.

Having a small repository of personal stories that allow you to make passing reference to your years in the field, a catastrophe averted, or a lesson learned is enormously valuable. But it’s also important to craft such stories so that the impact you describe focuses less on recognition you may have received, and more on how your organization or the people it serves benefited. Such an approach then allows you to segue back to the people in the room, what you’re aiming to achieve together, and how your experience and insight can help them.

After the unfortunate introduction described above, I managed to win over the room, but it took some effort. One alpha male participant seemed committed to debating me on every second point – often taking the discussion down unproductive rabbit holes. Because he had a leadership position within the group, I had to handle this carefully. He may have been difficult, regardless of how I was introduced, but the experience reminded me of what a difference it can make when the host presenting you inadvertently undermines your credibility.

In upcoming blogs, I’ll talk about:

In the meantime, if you have any communication dilemmas or presentation questions that you’d like to see addressed in future posts, let us know.