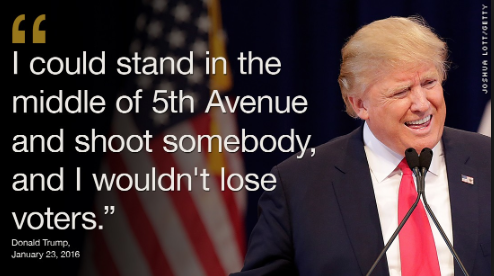 Shock and awe: Donald Trump’s communication style is as riveting as a train wreck, but a lot more dangerous. And his effectiveness has its limits. (photo by Joshua Lott, Getty Images)

As professional communicators who advise others on how to improve their ability to connect with audiences, colleague Sarah Neville and I have watched the astonishing ascension of political neophyte and insult-machine Donald Trump with dropped jaws. Here’s our conversation about the lessons to be learned from his fearless communication style, originally published on Huffington Post.

SARAH: When — and yes, this is a fervent wish — Donald Trump loses the US federal election, I’d consider hiring him as a communication coach.

Don’t get me wrong. I find his ignorance, racism and sexism repugnant. But he is a salesman to the core and boy, can he sell. Yes, I wish he’d use his powers for good rather than evil. But it’s hard not to be in awe of a real estate promoter with no political experience who’s made it this close to the Oval Office. And it’s his communication skills that have gotten him there.

SHARI: I agree that he is compellingly watchable, in a train wreck kind of a way. Despite – or perhaps because of! – his breathtaking lack of knowledge, integrity and basic human decency, he’s a master at crafting and delivering messages that resonate – at least with some people.

The trouble is most clients in the market for communications advice aren’t uneducated white men who feel disenfranchised by what’s happening in the world today! And I suspect his ability to adapt his tools to a broader audience are profoundly limited.

SARAH: That’s true. But you have to give him credit for what he does well.

Number one, he keeps it simple. I’m always pushing my business clients to use more accessible language. When we receive information verbally, simple words are easier to process – even for highly intelligent folks. But we feel it makes us look smarter if we cloak our ideas in fancy words:

“Competitive advantage will be achieved through continued focus on our core competencies, allowing us to leverage…” Trump absolutely avoids this trap.

The Boston Globe used the Flesch-Kincaid reading test to assess the announcement speeches of all candidates to determine grade level of the language used. Trump’s speech could have been understood by a 4th grader. From “Make America Great Again”, to “no one’s better than me at building walls”, he speaks to the masses. Because – again in his words – he “loves the poorly educated.”

SHARI: Yes, as long as they’re not crying babies grabbing focus at one of his rallies…

Another thing he does effectively is to reinforce his key messages over and over again. Conventional wisdom in the advertising world is that it takes seven repetitions before a slogan or product feature starts to become memorable. Trump has no resistance to hammering the same message home – regardless of how accurate it is — at every opportunity. His claims start to take on a life of their own. People failing to access their information from other sources are inclined to believe the assertions.

Nor do they realize that when he tweets “many people are saying” and then adds a demonstrably untrue accusation against his opponent, he’s actually the “many people” he’s referring to.

SARAH: Well, he certainly avoids the ‘data dump’ that I’m so often steering people away from. Most speakers dilute their arguments by over-sharing their research and analytics, citing way too many statistics and sources. Not only does complex language obscure meaning, so does over-reliance on data-driven evidence. Trump has no such burden.

Where he really shows brilliance is in knowing his audience and speaking directly to them. He often uses the 2nd person, addresses his audience head-on, in what’s known in linguistics as “directive speech acts”, where the speaker actually commands the listener to do something. “Look at Paris…”. He addresses us directly, as if continuing a conversation. It’s a powerful linguistic device that creates both immediacy and intimacy.

Like any good salesman, he sells the feeling, not the idea. Never mind that the finer points of policy are glossed over or entirely absent. He appeals to our emotions, whether it be joy and pride: “You’re going to be so happy”; or fear:”You have people coming through the border that are from all over. And they’re bad. They’re really bad.”

SHARI: Unpacking the components of his effectiveness really helps to make sense of a phenomenon that is otherwise head-smackingly incomprehensible. People who admire him cite his willingness to “tell it like it is” (by which they mean, to voice views that they themselves hold, but have not felt permission to express). So even though so many of his assertions qualify as “pants on fire” lies, as tracked by Politifact, his supporters see him as being authentic.

At the same time, he has managed to reinforce his brand — successful businessman — in the face of much evidence to the contrary, by doggedly proclaiming what a “winner” he is and by engaging in a scorched earth warfare of words that others are unwilling to match. So he ends up owning the field.

And yet even though, as you point out, he regularly employs the second person, he also breaks the speechwriter’s rule about the perils of excessive use of “I.” His interviews and speeches are peppered with exhaustive references to himself. Here’s a classic Trump interview response: “I’ve been, you know, I’ve been doing things for a long time. I see it all the time. I mean I see it so often. I see it when…” In the absence of other credible sources backing up his self-proclaimed wisdom, isn’t this finally wearing thin?

SARAH: Time will tell, and fingers crossed. Part of his scorched earth warfare is to say things that are utterly memorable. Calling the pope “disgraceful”? Insisting that Obama is the founder of ISIS? It’s hard to forget this stuff. And so his statements become lodged in our brains. And we keep talking about them.

You’ve also demonstrated another of his linguistic traits, which is to continually interrupt himself and veer off into asides and digressions. He often adds parentheses to his parentheses. While I wouldn’t call this a communication “best practice,” in Trump’s case he keeps listeners on their toes, stretching to follow the thread of his thought. That element of surprise keeps us waiting for what’s next.

SHARI: His interview with the editorial board of the Washington Post was a classic example of that. Reading the transcript felt like being dragged down a confusion of leading-nowhere corridors in the constantly short-circuiting brain of a megalomaniac man-child. But I see what you’re saying about the entertainment value of the resulting suspense. And if your audience doesn’t consider coherence or focus as important criteria by which to gauge your credibility, those corridors are as fun as a hall of mirrors at the amusement park!

Here’s the question, though: most of our clients looking to improve their presentation skills aren’t larger than life reality TV billionaires. How many of Trump’s strategies — as effective as they are for him — are likely to be useful to the rest of us?

SARAH: Valid question. Nobody’s likely to view a battalion of Trump-style-speakers as a public service. But we can borrow from the best elements of his style: he keeps his ideas simple and memorable; he knows his audience and addresses them directly; he appeals to their emotions.

So sure, try this at home — but with caution!