How to Use #Ottertime to Fight Online Hate and Disorient Trolls

Esther Choo is a physician who does medical commentary on CNN, MSNBC and BBC. She has more than 192,000 followers. And because she’s a feminist, tweets about gender inequities, and is also Asian American, she gets trolled.

But she’s smart and has a sense of humour, too. So here’s what she does when she gets sent online abuse: she responds by sharing an image of an otter. No explanation, just the image of the otter.

I love the brilliance of this strategy.

First of all, it’s confusing (see troller’s dumbfounded response, below). 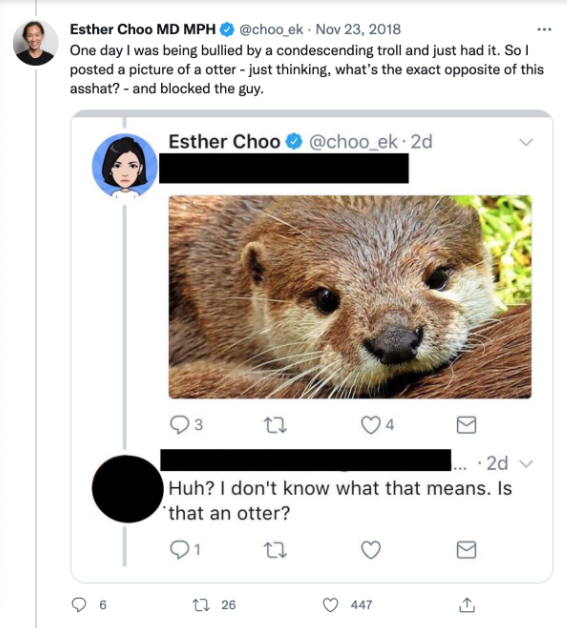 Don’t you love the reply? He can’t reconcile the image with his intended effect. So he’s forced to ask for clarification, which disrupts the invective and undermines his stream of attack.

Secondly, it’s a way of Dr. Choo saying “your comments are so ignorant and uncool as to be unworthy of my intellectual or emotional capital; they do not deserve a response.”

Which, instead of silencing her, makes him both irrelevant and, in a way, invisible.

Thirdly, the disconnect between his asshattedness and her sophistication is priceless.

Anyone who is regularly being targeted with online hate can attest to how exhausting it is to be on high alert as a result of vitriol and insults that find their way into the palm of your hand as you scroll Twitter or Facebook for news, or the threats that disrupt your workplace inbox. 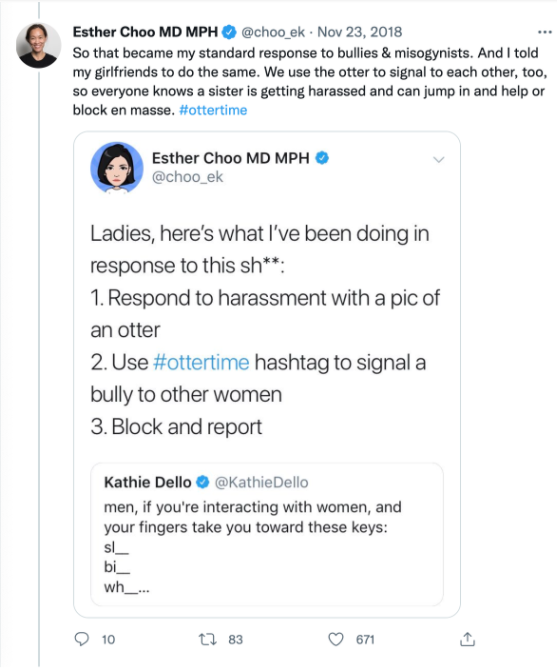 Finding, let alone maintaining, a sense of humour in the face of egregious hate speech and personal attacks is almost impossible. So having a default response that helps you avoid the downward spiral into someone else’s dark, ugly world – and also gives you something easy and constructive to do to subvert the negative energy – is a special kind of genius.

And inviting others to adopt the strategy is a special kind of sisterhood. But it gets better…

Dr. Choo then goes on to write about how perfect otters are as an analogy for women fighting back against online harassment:

Although they look harmless — and, often, it must be said, adorable — they can be really ferocious, using their powerful jaws and claws to tear apart enemies. Their thick fur makes them resilient to extreme cold and they’re smart enough to use rocks as tools and carry them around in pockets of skin. Moreover… 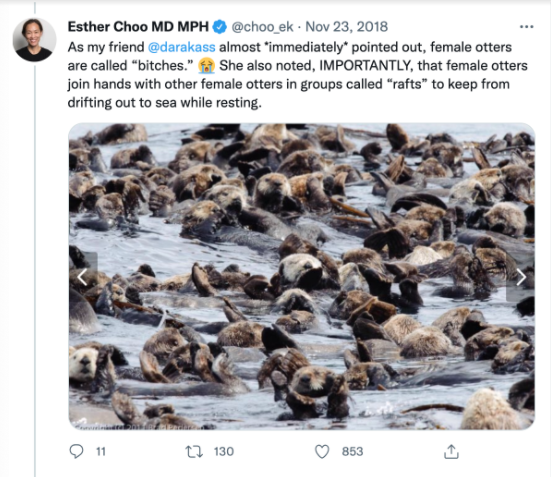 It makes me feel giddy to imagine the solidarity of women banding together like otters, emulating a “raft of bitches” to protect one another against the waves of online hate.

So let’s embrace and build on Dr. Choo’s brilliance with a five-step action:

Shari Graydon is the Catalyst of Informed Opinions, a non-profit amplifying the voices of women and gender-diverse people and combatting the #ToxicHush of online hate that is silencing voices that are already discouragingly under-represented.