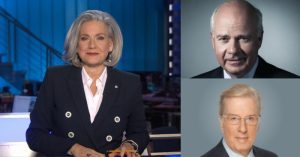 When Lisa Laflamme’s predecessor Lloyd Robertson signed off CTV’s nightly broadcast, he used to say, “And that’s the kind of day it’s been.”

Which — to someone invested in media literacy — seemed inadvertently misleading.

Because journalism, even at its best, is still a series of subjective decisions, every one of which is influenced by the experiences and perspectives of individuals.

Journalists choose which stories to cover, which sources to interview, which questions to ask and which clips to feature.

So it matters whose biases are at play. And women’s experiences and perspectives have been mostly absent: as news anchors and directors, as political decision-makers and expert sources.

That’s why in 2011 when Ms. Laflamme succeeded Mr. Robertson at CTV, I thought, “Finally!”

In the decade since, Laflamme’s chart-topping, award-winning performance confirmed her merit. And the outpouring of appreciation she’s received from colleagues and competitors is a tribute to the respect she’s earned.

How to explain the celebrated anchor’s boss apparently fretting over “who approved” allowing her hair to grey? (Never mind that Mr. Robertson was 77 at his exit and CBC’s Peter Mansbridge was 69. Both were permitted to age, enjoyed months of forewarning, and were given star, not scandal treatment.)

Clearly, we have work to do.

As long as some heterosexual men remain threatened by strong women who reject the pressure to conform to narrowly-defined and punishing appearance standards, and instead own their power and beauty, careers are vulnerable.

Because if someone with Ms. Laflamme’s status can be dismissed this way, what does that mean for younger, less experienced women from more marginalized communities?

A more astute “business decision” might have considered that “changing viewer habits” actually includes celebrating authenticity, valuing experience and recognizing how critical trust is in journalism.

Instead, the miscalculation generated loads of negative coverage, including 15 interviews I did about a story that should never have happened, and leading many in our network to ask what they could do in response.

Here’s my answer: You can support Informed Opinions.

How does that help? Our research reminds news organizations every day that they need to better reflect the diversity of the audiences they serve.

Our database of experts makes it easy for journalists to find qualified women with diverse perspectives to comment on every topic they can think of.

Our highly-rated workshops support women across fields and sectors to become more comfortable and effective when communicating in a world that still judges them more harshly than men.

And our campaign against #ToxicHush is pressing law-makers to bring in legislation to address the online hate that constitutes an existential threat to equality.

We need your help to do this work.