Up until this week, Rob Ford’s life experience — elected office, crack cocaine, domestic abuse — had little intersection with mine. But hearing his contention that he’d been “profiled” for the jaywalking ticket he received while in BC took me back. 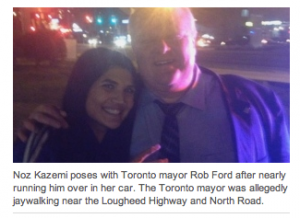 I felt badly for Mr. Ford that he wasn’t spotted by the Vancouver motorcycle cop who first acquainted me with the concept of jaywalking in 1979. As a 21-year-old (who, admittedly, had never had the benefit of holding municipal office or a drivers’ license, and so — unlike Mr. Ford — couldn’t be expected to know that I was about to break the law), I had been saved by a police officer of superior emotional intelligence.

On a beautiful spring day, my best friend Colleen and I were on the verge of stepping off the curb mid-block on trendy Fourth Avenue in Kitsilano. I believe we were aiming to cross over to the other side to check out the kicky summer fashions beckoning from a shop window. Although we hadn’t yet left the sidewalk for the street, our pushing-the-season short skirts made us conspicuous, and our poised attentiveness to the passing traffic must have rendered our intentions clear.

The perceptive motorcycle cop slowed to a stop immediately beside us. I have no actual memory of what he looked like, but my indelible impression all these years later is one of grace and charm. Because this is what he said:

“You know, I’m wondering what would possess two beautiful young women to consider crossing the street in the middle of the block for fifteen dollars a piece, when they could cross at the corner for free,” he mused.

Three decades later, as one who regularly gives workshops in strategic communications, I remain awed by the brilliance of the man’s sophisticated rhetorical approach: the blame-free brevity, the self-reflexive question, the unmistakable financial incentive!

I suspect he was too old to be of romantic interest to two university students, and Colleen, who had a longer line-up of suitors at the time than I did, doesn’t remember the incident at all. But his compliment was also a nice touch, and refreshingly free from any hint of lechery or manipulation. And the aggregate impact of his combined strategies was how brilliantly he succeeded in making doing the right thing an entertaining and appealing prospect.

We laughed and proceeded to walk to the corner where the traffic light aided us in making it to the other side of the street without endangering ourselves or others. In the process, we saved $30.

I can’t think of anyone who is more clearly in need of speaking with an authority who knows how to deliver irresistible advice than Mr. Ford. (News reports suggest that his jaywalking occurred on a seven-lane highway in a condition of some inebriation.) So think of the contribution that the enlightened traffic cop might have made, if he’d been the officer on duty at the time of the Toronto mayor’s misdemeanour. What if he’d been present and able to apply his folksy brand of analysis and motivation to issues that transcended the moment, applying to the mayor’s situation more broadly?

I like to imagine him sauntering up to Mr. Ford to ponder aloud:

“You know, I’m wondering why an affluent, sports-loving, tax-cutting politician bent on helping disadvantaged youth and saving citizens money would continue to draw a salary he doesn’t need, for a job he isn’t required to do, when he could be devoting more time to coaching kids and taking care of himself.”

Would the intervention from a uniformed man not reporting to Mr. Ford’s sworn enemy, Toronto Chief of Police Bill Blair, have had an impact? Unfortunately, we’ll never know.

What we do know is the value of strategic communications. That’s why we offer tailored training sessions, one-on-one coaching and organizational consultations to help non-profits, businesses and individuals to improve their verbal and written communications effectiveness.

Because making the position you advocate irresistible to others significantly increases your impact.