Don’t blame the messenger, folks: When Steve Paikin, host of The Agenda blogged and tweeted recently about the show’s difficulties in recruiting female guests, he elicited a firestorm of protest. But what he says rings true to me. Our experience is that women decline interviews much more often than their male counterparts.

Many journalists have told us this, and hundreds of expert women we’ve surveyed over the past four years have acknowledged their reluctance. 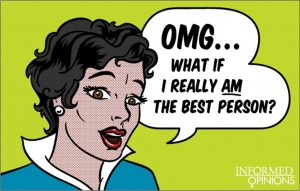 This is why Informed Opinions exists in the first place. In 1994, as the president of MediaWatch, I personally called dozens of expert women across the country to invite them to be listed in an experts resource guide for journalists. In response, dozens of them said to me, “Oh, Shari; I’m so flattered to be asked. But I’m really not the best person.” Regrettably, 20 years later, this remains a common response. (Which is why we created the cartoon at the right.)

The data in the chart below was drawn from surveys of university professors, business and NGO leaders from all over Canada. We asked them to identify why they turned down media interview requests. Their answers fall into three main categories.

1. THEY’RE TIME-STRAPPED  Expert women – like expert men – are busy. They have demanding jobs (they’re experts!), and their time is highly scheduled (meetings, deadlines, carpools, kids’ activities, parents’ medical appointments, meals – in other words, life). Many men juggle similar responsibilities, but lots of the most senior men have wives who take on more of those tasks.

And guess what? Although it’s dangerous to make generalizations, I’m going to go out on a limb here and say that, in my experience, lots of women have little to no desire for the limelight. They don’t lack confidence or ambition, they’re just not motivated by public profile. They want to have impact, but they don’t need to be front and centre; if they can make a difference behind the scenes, that’s fine. Especially if it’s more efficient.

Because busy, high-achieving women are very protective of and pragmatic about how they spend their time. They won’t willingly shoe-horn another appointment into their already crammed schedule without being convinced that doing so is going to be worth the collateral damage to rest of their day.

Note to journalists: you need to give them some incentive. (More about that below.) 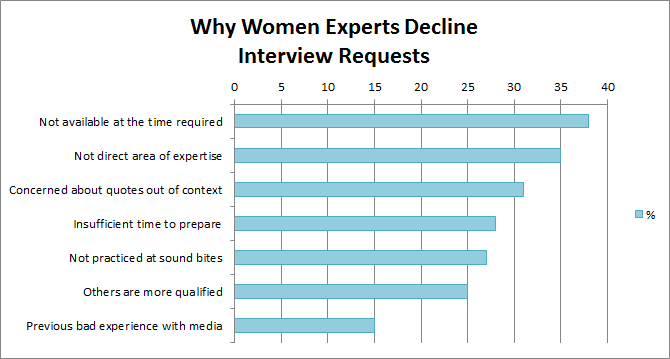 2. THEY HOLD THEMSELVES UP TO A HIGHER STANDARD OF AUTHORITY  Women – even if they hold a PhD, have 30 years of experience, and have published well-regarded books on an issue – are usually conscious of who else in their field would be even better to address the specific topic of the day. And so when they say, “I’m really not the best person,” they’re not being falsely modest or begging you to stroke their ego; they’re simply acknowledging a fact.

At the same time, on some level, they know that the world itself holds them up to a higher standard of authority. They don’t need to know Charlotte Whitton’s famous quote — “Whatever women do they must do twice as well as men to be thought half as good…” to understand that it applies to them. They only need to have watched a fraction of the news coverage of Hilary Clinton over the past 20 years. 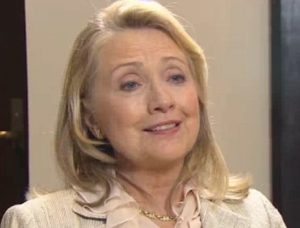 Consider: The former US Secretary of State has a formidable intellect, punishing work ethic and for four years, she held one of the most powerful jobs in the world. And yet lazy, ignorant bloggers and trolls were able to generate headlines simply by dissing the woman for her hair, her make-up and her clothing.

Women aren’t stupid: they understand that television is a visual medium. And if they’re having a bad hair day, some viewers will deem that worth condemning. (CBC broadcaster Wendy Mesley told me back in the 1990s when her hair was longer than it is now that she received far more mail about her fly-away locks than about her reporting.)

(For the record, the very first piece of snail mail I received as a newly minted columnist with the Vancouver Sun was addressed to Shari Graydon, President, Bitch of the Year Club.)

3. THEY DON’T TRUST THE MEDIA  Finally, because expert women pay attention to the news, they notice and object to sensationalist headlines, irresponsible reporting, de-contextualized data or misleading quotes. And they’re not interested in risking their reputation in a high stakes game where they have no control over the end product.

Can you blame them?

No. But that doesn’t mean we don’t encourage them to accept interviews more often anyway. That’s our raison d’etre. We believe that the dramatic gender imbalance in public discourse (the ratio of male to female perspectives remains about 4 to 1 in the most influential Canadian media) has a huge impact on our society. We’re convinced that many policies and priorities fail to account for the differing needs of women, of children, of people living with disabilities, of the elderly because women’s voices are so often absent.

SO here are a few of the things we say to the women we speak to and train:

Informed Opinions is working to amplify women’s voices and bridge the gender gap in public discourse. We teach smart women to translate their expertise into concise, persuasive written commentary, recognizing that doing so constitutes the “gateway drug” to agreeing to interviews. (Once they’ve had the opportunity to reflect on and craft their ideas and analysis, controlling every word, they’re more willing to say “yes” to the interview requests they receive as a result.

We also manage an Experts Database of women designed to make it easier for journalists to access knowledgeable female sources from across the country. Regrettably, when we recently relied on volunteer help to migrate our old site to a new platform, the Experts Database was left behind. We’re working to fix that, and hope to have it up by the end of the week.