When age is a valued credential

The moment was both painful and telling. As the MC introduced me to the 250 teenagers assembled to engage in a discussion about the importance of media literacy in an image-dominated age, I watched every kid’s eyes glaze-over.

It wasn’t the reference to my two award-winning books for youth, or my ten years as president of Media Action. No, the offending piece of information was my status as a grandmother. 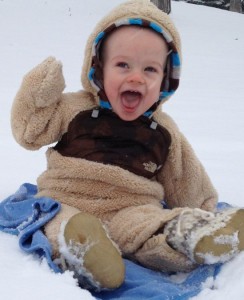 Sam, a source of pure unadulterated joy in the lives of everyone he meets.

I am delighted enough with this designation that the screensaver on my smart phone features a picture of Sam, a more adorable boy than you could possibly imagine. That’s how the MC came to learn of his existence. But by using the relationship as a descriptor during my introduction, she had inadvertently made me irrelevant to the kids in the hall.

I was reminded of this incident last week while participating in another panel convened by the Great Canadian Theatre Company. The occasion was a discussion on women and aging held in advance of a matinee performance of Mary Walsh’s Dancing With Rage. Considering the focus of the panel, and the 75 mostly-over-50 women assembled, my grandmother status might have been relevant. (In this context, the youthfulness of the other panelists – 32 and 27 – was striking.) 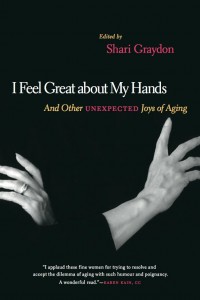 However, my claim to legitimacy came from having had the wisdom to invite 40 other women of a certain age to contribute to the collection, I Feel Great About My Hands back in 2010. Shortly after the book came out, I was speaking with Marion, a scientist in her 80s. When I told her that the collection’s subtitle was “and other unexpected joys of aging”, there was a pause on her end of the line. And then Marion asked me, not unkindly,

“And what would you know about aging, Shari?”

I felt appropriately humbled. Relatively speaking, a 50-something year-old knows almost nothing about aging. And — having witnessed up close the plethora of health and mobility issues affecting my beloved former in-laws and own cherished parents — it’s not like I don’t appreciate the difference.

At the GCTC last week, I was also humbled by the observations and inspirations elicited from members of the audience, many of whom might have been even better choices for the panel than the three of us who had been invited to speak.

The voices missing in Canadian public discourse are not just those of women, but those of women of diverse ages and experiences, and of wider ranging ethnic and cultural backgrounds. Not to mention those who are living with disabilities, and/or battling unconscious discrimination based on a range of identities, including having entered the “m’am” stage of life.

As members of the audience pointed out, nothing quite prepares you for being rendered invisible at precisely the moment when you really have your act together. Or being spoken to as if you have already entered a state of catatonic dementia.  We laughed about the suggestion that substituting “vintage” for “old” might increase our appeal, but the cost to society of marginalizing an entire generation of people remains a serious one.

Aboriginal communities have many things to teach us, but appreciation for elders – the insights offered by lives lived and lessons learned – is certainly among them.

In my more optimistic moments, I fantasize that the combination of the baby boomers’ demographic bulge and the continuing need for skilled workers will help to transform individual and collective attitudes to grey hair and wrinkles when they come paired with a woman’s face.

The more willing we are to wear our age, and the more visible we remain, engaged in and commenting on the world around us, the easier it will for us to collectively counter the stereotypes perpetuated by a youth-obsessed culture.

Last weekend the GCTC lobby was overflowing with women whose experience and expertise could add enormous value to public discourse. I wish I’d had the forethought to have offered a copy of I Feel Great About My Hands as a door prize. If I’d passed a hat for business cards, I could have followed up with all those present, encouraging them to visit the Resources page on our website, or attend one of our workshops.

Their voices are needed.