(The following op ed was published in the Globe and Mail‘s online edition yesterday to help launch #respectHER, a joint campaign of Equal Voice and Informed Opinions.)

At least some of the audience’s weeping was laughter-induced. But it was hard to tell how much. 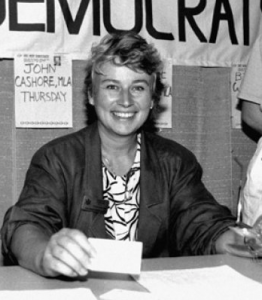 When she was first elected, Vancouver Magazine called Darlene Marzari, “the first civic politician hereabouts to make a full-time career out of trying to do things right rather than just getting them done.”

At the front of the conference room, former B.C. cabinet minister, Darlene Marzari was wearing a red business dress she had regularly sported during her time in office. Astonishingly, she had climbed into the dress AFTER donning her teenage son’s hockey pads. Zipping up the garment without effort, and reinforcing her point with too many disturbing anecdotes to recount, she explained that the weight she had packed on as a politician was necessary armor that allowed her to survive the legislative chamber as a woman.

Ms. Marzari’s illuminating skit – at once wildly hilarious and deeply depressing – took place almost 20 years ago. But the hostility she endured is unpromisingly contemporary. And it’s costing us all.

In the past year alone, Conservative MP Michelle Rempel was labelled a prostitute for perching on her parliamentary desk; Liberal MP Chrystia Freeland was heckled into silence for having a “little girl” voice; and NDP MP Megan Leslie called out the appearance comments and physical touching that she and her female colleagues still frequently experience in their place of work. (Yes, it’s 2014 everywhere else, but pockets of Parliament Hill appear to be stuck back in 1963.)

To be sure, many male MPs are equally appalled by such bad behaviour, and political life has always required a thick skin. But it remains Mad Men territory for women. And at a time of increasingly complex social, economic and environmental challenges, this is bad news for democracy.

Other sectors are bending over backward to increase their appeal to the best, brightest and most diverse work force possible. Banks, law firms and universities are responding to a raft of research documenting the competitive edge accorded organizations that incorporate skilled women. They recognize the importance of creating workplace atmospheres that will attract top female talent.

But in an age of anonymous online trolls and twitter-amplified personal attacks, entering a political world that remains elbows-up and tolerant of troglodytes is becoming even less attractive to anyone – female OR male – who is more driven by a desire to do good than fight dirty.

And it’s not like the disrepute of politics isn’t deterrent enough. Indefensible patronage, unaccountable spending, inexcusable election practices – they’ve all taken a toll.

That’s why Equal Voice and Informed Opinions saluted The Hill Times last week. The Ottawa weekly paper responded to calls requesting that it abandon its annual tradition of polling MPs on the “sexiest” elected officials of the year. This is a small but symbolic act, worth emulating and expanding. And its timing coincides with our joint #respecther campaign – a bid to mobilize Canadians, who overwhelmingly support gender equality and expect genuine democratic debate from their representatives. We’re encouraging all politicians, partisan staff and journalists to embrace the spirit of the newspaper’s decision and promote a culture of respect.

Dissing women for failing to conform to outmoded stereotypes of how a mother or a “lady” is expected to behave is juvenile schoolyard chatter, not political discourse. And those who engage in below-the-belt insults designed to denigrate a rival on the basis of his or her appearance or sexuality isn’t worthy of the label “public servant.”

It’s beyond time to abandon personal attacks and sexist slurs, and to focus energy instead on ideas and policies. Exit interviews conducted with retiring MPs and catalogued in the recently published book by Samara co-founders Alison Loat and Michael McMillan make clear the damage being done. The title alone – Tragedy in the Commons – speaks volumes.

Politicians and their supporters need to aim higher. And citizens? We need to reward them for doing so at the ballot box.