Some context on a favourite feminist philanthropist 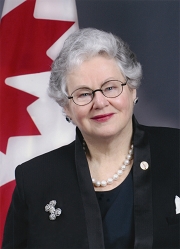 On the rare occasions when I get slammed on Twitter or condemned by an anonymous troll, I sometimes console myself that at least the criticism isn’t splashed across every news website, broadcast and paper in the country.

That’s why it pained me to see the unfortunate off-the-cuff remark Nancy Ruth made last week to a scrum of reporters feed a frenzy of national news coverage.

For decades, the woman has provided unprecedented leadership on advancing women’s equality. For the record, Informed Opinions benefits from her support, just like dozens of other equality-seeking organizations and initiatives.

Nancy Ruth is one of the founders of the Women’s Legal Education and Action Fund, and the Canadian Women’s Foundation, both of which have helped to improve the lives of millions of Canadian women. I am proud to call her a patron, and I admire her enormously: for her dedication to human rights; and for the countless hours she’s spent volunteering her time on boards such as the Economic Council of Canada, the Canadian Centre for Arms Control, and the International Institute of Concern for Public Health — to name just a few.

In the Senate, she has sponsored bills on physician-assisted death; fought for the hate speech provisions of the Criminal Code to include sex, age and disability; and pushed for national action plans on women, peace and security, and on violence against women. She also actively encourages government departments to implement the kind of gender-based analysis that’s been shown to make a difference to the fairness and effectiveness of public policy.

I’m willing to bet my mortgage that she’s given away far more of her own money than she’s earned or expensed as a senator.

Such generosity and commitment will never reap the kind of attention given last week’s quip, but they deserve that, and more.