WHAT DIFFERENCE DO WOMEN’S VOICES MAKE? 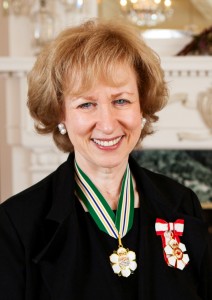 You know that old saying, “If you’re the smartest person in the room, you’re probably in the wrong room”? I looked up its origins today, and couldn’t find an attribution (which, as Virginia Woolf pointed out years ago, likely means the observation was first articulated by a woman!)

Although I’m pretty clear about the value of my skill set, in the work I do with Informed Opinions, I am NEVER the smartest person in the room. And that’s a source of enormous satisfaction for me. Because it means I’m getting to play a small role in exposing the world to the talents and insights of women whose comprehensive familiarity with vast arenas of knowledge can benefit us all.

The Right Honourable Kim Campbell, Canada’s first and, regrettably, only female Prime Minster, has been advocating for the increased representation of women for decades.

That’s why no arm-twisting was necessary to get her to agree to become one of the project’s honorary patrons. And on Friday of this week, she’ll be sitting down with me for an armchair discussion on the difference women’s voices make at a public event co-hosted by SFU and UBC in Vancouver. She’ll expand on her advocacy efforts to increase women’s participation in politics and talk about her own experiences with the media.

Having heard Ms. Campbell speak many times, I suspect she often IS the smartest person in the room. But her insights are invariably delivered with the kind of grace, humour and respect that reduce the intimidation factor. She’s entertaining and inspirational company.

In the meantime, Informed Opinions continues to precipitate and/or support the dissemination of hundreds of expert commentaries on diverse issues of critical importance not just to women, but to Canada as a whole. Each participant’s approach to engaging with media differs, depending on her field and circumstances.

Joanne Cave, a Rhodes Scholar studying social policy at Oxford University, is a case in point. She says,

“After I attended the Informed Opinions workshop, the ideas and tools shared took a year to percolate. But in August my first op-ed was published in four newspapers across Canada, generating interest from politicians, non-profits and community members. I never imagined that commentary writing would be a way to make my voice matter, and I’m so grateful.”

In fact, six weeks after her first piece on the funding environment for charities was published, she submitted a second one on dementia policy and informal caregiving, the focus of her research. It also got picked up.

Where’s the line between professional discretion and a responsibility to advocate?

Three years ago, a significantly pregnant Martha Paynter organized and attended an Informed Opinions workshop in Halifax, recruiting more than a dozen other smart, educated, articulate activists and professors to invest a day and some professional development dollars into expanding their advocacy tool kits. Her employment context is very different from Joanne’s and as a result, she says, “I’ve struggled to balance professional discretion with my responsibility to advocate for health and reproductive justice. I both work for the Nova Scotia Department of Health and Wellness, and am an activist for equitable health access.”

How does she decide when it’s okay to speak up?

Martha has also used her networks and the Informed Opinions training to encourage other friends and colleagues to take up media opportunities on which she’s unable to comment publicly, such as changes to Nova Scotia Public Health perinatal services.

“Since attending a workshop in 2011, I have become attuned to the exclusion of women’s voices in the media, and conscious of how infrequently I participate – and in particular, write – despite my ceaseless opining in my own head. I do hope to improve on this!”