What’s your definition of shame?

Although Informed Opinions focuses on helping women translate their expert knowledge into media commentary, you don’t have to be an authority on a topic to add value to public discourse. What is required is that the perspective you’re sharing isn’t one that’s already received wide coverage.

As just one example, here’s my personal take on some of the news coverage of Brazil’s loss to Germany in last week’s World Cup semi-final… 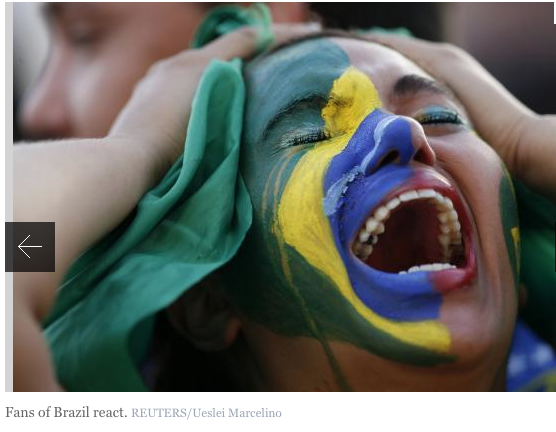 (published in The Ottawa Citizen, print and online editions 12 July 2014)

When I saw the repeated references to the shame and dishonor Brazilians felt over the defeat of their national soccer team at the feet of the Germans, I had to turn to my dictionary for help.

It’s not that I don’t appreciate the pain of losing – especially with the eyes of millions upon you. Only two days before I had watched Canada’s rising tennis star, Eugenie Bouchard, give up two straight sets to her opponent in the Wimbledon final. Seeing her lose the coveted Rosewater Dish in record time, I felt enormous empathy for the young woman. Hearing her self-criticism – “I don’t deserve [the crowd’s] love,” she said in her obligatory post-match interview – made my heart ache.

But Collins defines shame as “painful emotion resulting from an awareness of having done something dishonourable, unworthy, degrading.” And I find it troubling to think that witnessing professional athletes lose a soccer game – even if the world IS watching – would engender such feelings.

I get that Brazilians have an unusually high investment of identity in their soccer team – akin, no doubt, to how many Canadians feel about hockey. And yes, their investment was likely also magnified by their status as the host country. But I’m going to risk public condemnation here and suggest that such attachment is not a good thing – regardless of who wins or loses.  I think it may reflect an unfortunate impoverishment of pride in bigger, more important issues.

I personally feel shame over my country’s historic treatment of Aboriginal peoples, and the continuing poverty and inequity many of them continue to experience in 2014. I feel a sense of disgrace about my government’s unwillingness to acknowledge, let alone seek to address, the devastating impacts of climate change even as we witness its effects every day. And when I watched men, women and teenagers from across the country march in the Idle No More movement, I felt that my own failure to chain myself to the gates of Parliament in similar protest was dishonourable, given how outraged I am by so many of the decisions that have been made in its halls, on my behalf.

Professional athletes are extraordinarily well compensated. Based on the individual market value of Brazil’s players, its team is reportedly worth $693 million. If you paid teachers that well, and your kids emerged from school without having learned anything, shame would be an appropriate label. And if you invested your sense of national identity in peace, order and good government, and what you got instead was crass, opportunistic wedge politics and a blatant disregard for scientific evidence and democracy, you might well feel disgrace.

So yes, I understand the sentiments.

But soccer is a game in which one team must, by definition, lose. And the win-loss ratio of a group of exceptionally wealthy players is no reflection on the accomplishments or value of its fans. Nor should anyone see it as such.

Maybe the “epic tragedy” is not Brazil’s loss on the soccer pitch, but the billions of dollars the country spent on the tournament at a time when nearly 16% of its population lives below the poverty line, many of them without access to sewer lines or health care.

Maybe we might reconsider treating athletes in any sport as minor gods, as stand-ins for our own dreams of grandeur. And maybe, instead, we could revisit the concept of honour as something defined by personal integrity and allegiance to moral principles.

In my fantasy, athletes wouldn’t get paid millions of dollars a year to play sports. But until that changes, may be they can be encouraged to make like Warren Buffet and Bill Gates, and invest their largesse in the future of the planet and the people who depend on it. But for that to happen, we’ll have to stop seeing their deeds as a source of vicarious glory that reflects – for good or for ill – on us.