Why Journalists Should Be Forced to Quote More Women

It’s often seen as a dirty word, and I usually avoid using it. So when Lisa Kimmel, the general manager of Edelman PR agency recently invited me to debate the merits of imposing a gender “quota” on journalists as a means of increasing the number of women quoted in the news, I balked.

Even though the aim of the social enterprise I lead is explicitly to amplify women’s voices, and I’m convinced that doing so could reshape society for the better, I replied, “Not even I would argue that!”

But faced with the opportunity to provoke discussion in a public forum and cross swords with a journalist famous for her ability to elicit strong reactions, I reconsidered. For the sake of debate, I was willing to risk knee jerk dismissals and engage in the intellectual exercise – even if it did only mean a few minutes at the Rotman School of Management microphone.

Interestingly, the process of building the argument changed my mind. Anticipating the likely objections of the Globe and Mail’s Margaret Wente in order to refute them convinced me of the merits of what I originally deemed an outlandish and indefensible suggestion. I’ll tell you why in a minute. But first, let’s get a few of her arguments out of the way.

Not one to let nuance get in the way of hyperbole, Ms. Wente declared quotas “the most dreadful thing in the world.”

I didn’t have the opportunity to offer some comparative alternatives at the time, but most of the many journalists I know, given a choice between say, being gang raped, sold into slavery, or compelled to quote a few more female sources – even if it did take longer to find them – would happily opt for an imposed quota.

Especially since, as the Globe columnist herself made clear, “We’re not lacking for strong female role models.” In the next breath, however, she insisted on the existence of a mythical “best person” who responsible journalists must seek to quote above all others for any given article.

This is a disingenuous claim. For the vast majority of news stories that benefit from insights offered by an authoritative source, there is no single “best person.” Virtually every event or announcement covered by the media could be given valuable context and analysis by a number of people with informed opinions about related issues or likely consequences. They won’t all give the same context and analysis, and indeed, believing that one individual is necessarily “the best” implies a disturbingly narrow perspective on the potential implications of any given story.

So here’s why a quota on quoting women might actually make sense:

A raft of respected research makes clear: whether you’re talking about scientific research, corporate governance, or social policy, including the insights and ideas of competent women alongside men leads to greater innovation and competitiveness, improved client responsiveness and better financial performance. More perspectives translate into more empathy and greater collaboration.

Mixed gender teams develop safer drugs and make more ethical decisions. Not because women are better than men, but because they often think about and approach things differently, and diversity is a demonstrated strength. (You don’t have to take an advocate’s word for it: the studies have been funded by independent research councils, conducted by esteemed academics, and embraced by bank presidents convinced that to get the best talent, you have to expand your recruitment pool.

So given the critical role played by the news media, and the complex social, economic and environmental challenges they’re tasked with telling us about, we’d be smart to broaden the perspectives we invite to weigh in and ensure we more often seek the views of people (OK, women) whose brains are apparently wired to consider consequences. The downstream benefits are likely to include more family-friendly policies, stronger communities, and reduced conflict – everywhere.

We know that smart women chronically under-estimate their abilities and, in so doing, often decline to pontificate when given the chance. National Post columnist Jonathan Kay explained this by noting that most women just aren’t arrogant enough to think they have all the answers. Which, you know, seems like a reasonable position for pretty much everybody to adopt. 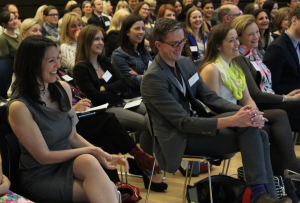 Do we need to point out that being a microphone hog doesn’t always lead to value-added commentary? That we’d benefit from a little more Lang and a lot less O’Leary?

In fact, responding to the new book about the female confidence gap, New York Times columnist David Brooks recently cited psychological research suggesting that overconfidence is actually the more serious problem (think 2009 financial meltdown). He argued for an approach that would inject women’s tendency for “self-policing into the wider culture”, and asked, “How can each of us get a better mixture of “female” self-doubt and “male” self-assertion?

Centuries of entrenched sexism deemed women intellectually feeble and emotionally volatile. Ignoring for a minute who was responsible for perpetuating such attitudes, think of the pressure that put on men to be the go-to guys on almost everything. It’s past time to relieve them of the responsibility of having to know it all.

3. A BROADER DEFINITION OF NEWS:

Now, it’s true that quoting more women might make us pay attention to other things. But would that be so wrong?

What if we focused less on hockey fights and more on health research? If so-called “women’s issues” got front-page treatment – even when the women being profiled weren’t wearing bikinis? If some of what’s currently deemed “soft” news and relegated to the life section were accorded more importance? If we stopped devoting detailed front page coverage to misogynist murderers and more to the social context that contributes to creating them in the first place?

4. WHAT GETS MEASURED GETS DONE:

Some reporters and producers say they’d like to quote women more often – but how many are really investing significant effort in expanding their pool of sources? Doing so requires creativity, resourcefulness and time, and when you’re on deadline, it’s easier to default to the usual suspects. So I think it’s fair to say that despite claims made to the contrary, nobody is doing “everything they can.”

If they were, they would be calling more of the thousand women Informed Opinions has worked with across the country. Women with deep knowledge on a wide variety of topics who are eager to share what they know…Women with distinguished careers and respected reputations who hold PhDs in economics, political science and marine biology, and boast decades of experience in business, immunology and criminal law…

As the successful imposition of quotas in the academic world and relating to board appointments have shown, if we were to compel reporters to start tracking the ratio of women to men they interview, they would somehow manage to find and interview more expert women.

And that would be demonstrably good for all of us.

NOTE: Edelman has posted a 3-minute video from the event (focusing mostly on Lisa Kimmel’s introduction, and including very brief rebuttals by Ms. Wente and me onto Youtube here.