Words Matter: Canada’s anthem finally acknowledges that half our citizens aren’t captured by the term “men” 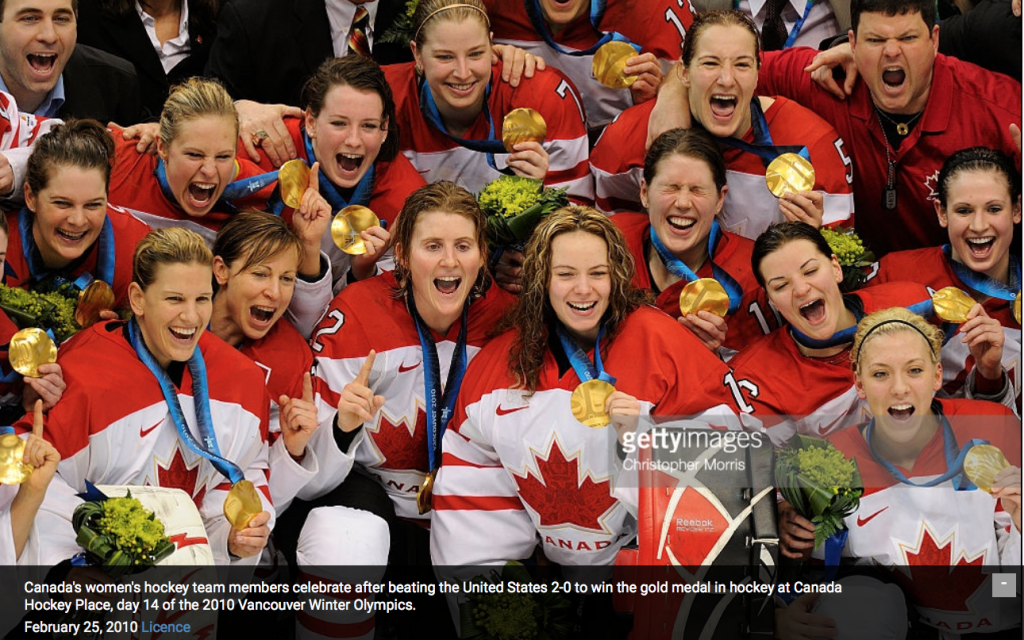 Eight years ago, I penned the following op ed for the Ottawa Citizen on the occasion of the previous government’s brief flirtation with changing the lyrics of O Canada to include women. I am thrilled that the Senate today passed the bill the House of Commons originally approved in 2016. Thank you Nancy Ruth, Vivienne Poy and the late Mauril Belanger for championing this cause over many years.

The Vancouver Olympic games did many things.

They showcased the majestic beauty of British Columbia; they inspired us with spectacular athleticism; and they repeatedly underlined the boneheaded inappropriateness of one line of our national anthem.

There they were — Maëlle and Christine, Kaillie and Heather, Hayley and Shannon, flushed with triumph, draped in gold medals and owning the podium on our behalf.

But as our hearts swelled with pride in their death-defying feats and dazzling team work, it was hard not to wonder, what’s a gal gotta do to be included in the words of her national anthem? Because, no matter how you slice it, if you’re sporting double-X chromosomes, “In all thy sons command” just doesn’t do the job. I say this with all due respect to the bloggers and commentators who insist that the word “sons” refers to women as much as men. I’m happy to wait while you check your dictionaries. Still not convinced? See how it feels to substitute the word “daughter” in Rudyard Kipling’s memorable line, “And you’ll be a man, my daughter.” See what I mean?

Or consider, for a moment, the case of those unfortunate people denied the benefit of viewing the 1960s TV series, My Three Sons, during its original run. Imagine if, years later, they come across the title of the show in their local TV guide. What are the chances they’re going to assume the title was referring to three female offspring, or even two boys and a girl? Zero. The chances are zero.

You can trust me on this one, I’ve tried it at home. And at work. Teaching business writing at a community college in the late 1990s, I encouraged hundreds of students to embrace the power of precise language. Every year I’d invite my classes to close their eyes and picture an image to accompany Robert Browning’s famous words: “Man’s reach must exceed his grasp, or what’s a heaven for?” When I quizzed them afterwards about the image that had popped into their heads, male and female students alike typically described one of three things: a) some guy in a suit climbing a corporate ladder; b) a major basketball star shooting hoops; or c) Michelangelo’s Adam reaching out to God on the ceiling of the Sistine Chapel — not a woman among them.

Go figure. It turns out human beings are quite literal in response to language. On hearing the word “kangaroo,” people invariably picture not a dog or a horse, but a kangaroo. And when we read words like “statesman” or “mankind,” the visual reference created in our minds is, inevitably, male.

Words matter. Just ask scabs and terrorists — or is that replacement workers and freedom fighters? Research backs this up. And that’s why for years now, newspapers have chosen to incorporate gender neutral terms into their style guides. Journalists want what they write to be clear; they want readers to understand what they mean. So they use city councillor not alderman, fire fighter not fireman, and flight attendant not stewardess.

I understand that Canadians are emotional about the perceived threat to our national anthem. But listening to open line radio callers and reading the feedback trails online, I was struck by the absence of cogent analysis.

“You’re messing with tradition,” cried some (evidently unaware that the original 1908 lyrics were gender neutral, and all sorts of other changes were made in the 1980s).

“Don’t try to distract us from the important issues,” howled others.

(And I agree there are lots of other pressing matters. But ensuring that our national anthem uses language that reflects Canada’s enshrined equality principles and includes the majority of our population is also kind of important.)

Then there was the deeply unfortunate, “How dare this government do something for women’s equality?!”

And I sympathize with the “too little too late” reaction, and the “no way you’re winning me over with such an obvious ploy” response.

But here’s the thing: if a program or policy aims to make this country fairer and more just, in a substantive or symbolic way, the political stripe of the party proposing it should be irrelevant.

Standing in the way of progress for purely partisan reasons is part of what’s wrong with Canadian politics in the first place. (Even politicians know that.) And when we’re done fixing the national anthem, maybe we can convince the Olympic brass to substitute “women’s” for “ladies” when they’re naming all those sports that describe female competitors as if they were dainty, simpering tea-sippers, instead of gutsy, driven jocks.

Just to be clear, I recognize that our female athletes are also capable of enormous grace, arresting style, and seductive femininity. But consider this: nobody is lining up to compete in, let alone watch “gentlemen’s snowboard cross.”

Shari Graydon is an Ottawa-based author who sings a gender neutral version of O Canada with gusto every chance she gets.