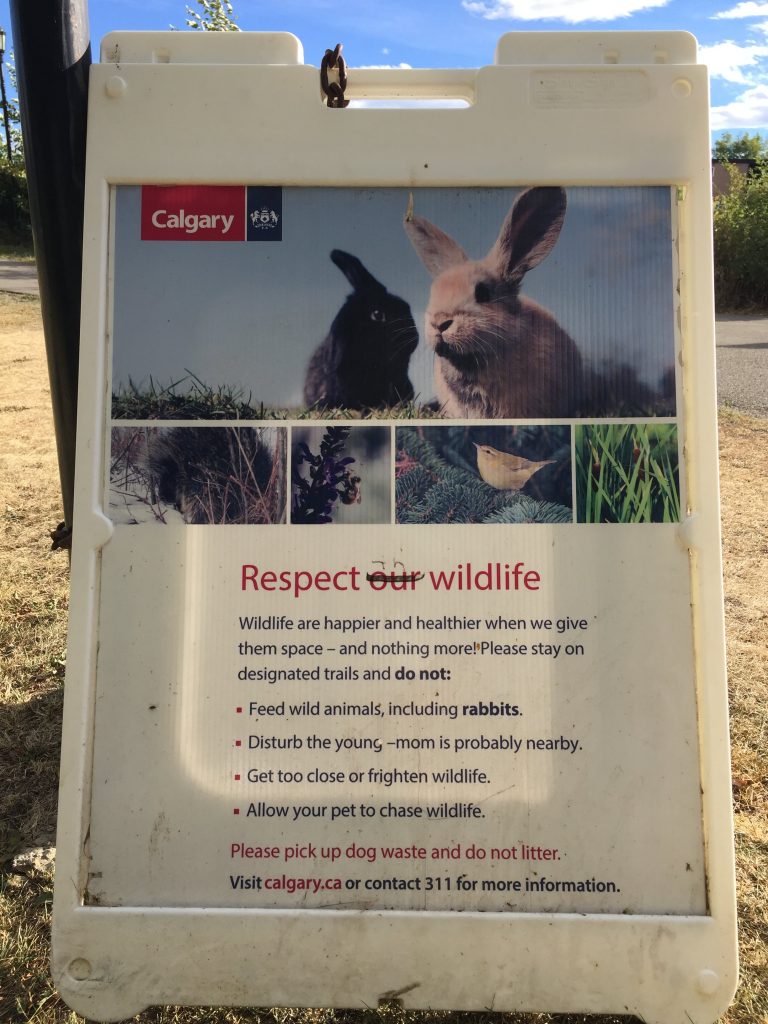 Can you spot the strategic communications error in this Calgary park signage? (And do you know why it’s relevant for your next media interview?)

I’m not talking about the graffiti’d objection to the ownership of wild bunnies and birds signalled by the possessive “our” — although I agree with the correction.

No, I’m referring to the text’s unfortunate reinforcement of a series of actions that park officials most certainly do not want visitors to do. Although the first three instructions — Respect wildlife, give them space, stay on designated trails — are a promising start, placing “do not” at the end of the second sentence, following it with a colon, and then using active verbs to list in point form the four things they’re seeking to prevent, the sign inadvertently plants images of the forbidden activities.

Because here’s the thing: our brains cannot picture the negative of an event.

That’s why smart parents sending their kids out to play caution “Look both ways before you cross the street,” rather than “Don’t run into the street!” Because what do you envision when you hear the latter advice? Running into the street!

The active verbs at the start of the four points on the park’s sign perform a similar function: “Feed wild animals”, “Disturb the young”, “Get too close”, and “Allow your pet to chase wildlife” — are easily absorbed as imperative commands by audiences accustomed to skim-reading official notices for the take-aways.

The far better alternative is to paint vivid images of the behaviour you do want: whether looking both ways before crossing the street or, in the Calgary parks’ case, letting the wild animals alone to forage for food as nature intended, leaving their young to the care of their protective mothers, and keeping your dogs on a leash out of respect for the fact that they’re visiting someone else’s habitat.

The same principle applies to how you communicate in a media interview, and it comes up in almost every workshop we deliver. We invite experts to submit draft key messages in advance of the workshop, and often one or more will frame the thought they most want people to understand and remember in negative terms.

When you read the following sentence, what images does your brain furnish to complement the words?

Canada is not facing a migration crisis.

I picture a tidal wave of people carrying their worldly possessions on their back, streaming across the border. The “not” of the sentence just isn’t up to the task of programming my cognitive equipment to negate the vivid images called forth by “migrant crisis”.

When seeking to combat a negative, the effective communication choice is to replace it with an alternative picture or scenario. In this case, that could be describing the density of our population compared with the US, or India — or Germany — which has accepted hundreds of thousands more migrants in recent years than we have.

Sexual and reproductive health are not fringe issues.

In this case, the development advocate continued on to say that the two issues are “central to our health and well-being.” This positive characterization — although conceptual, rather than concrete — nevertheless offers a positive alternative.

If you want further demonstration of the effectiveness of positive vs negative framing, you can experiment at home or with colleagues. When interacting with a recalcitrant teenager or unresponsive partner, try replacing negative admonishments — “Quit smoking in my car!” — with positive alternatives — “My car is a tobacco-free sanctuary off limits to smokers.”

Such phrasing may not generate immediate results, but at very least, you won’t be inadvertently reinforcing the very behaviour you object to. And practicing in low-risk, private environments will increase your ability to avoid negative messaging when your comments are being recorded and publicly shared through media.