What Gets Measured Gets Done – #WGMGD

This conversation should be over: 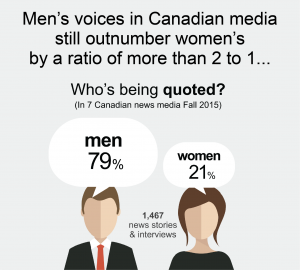 Most people no longer accept the absence of women’s insights and contributions as defensible; #HeForShe initiatives are springing up across North America; even senior male leaders in the tech and banking sectors have publicly declared their unwillingness to serve on panels made up only of guys.

And yet in one of the most progressive countries in the world, women’s voices in the public discourse remain outnumbered by a ratio of more than two to one.

The good news is that in 2010, when we launched Informed Opinions, the ratio was actually four or five male voices to every female one. So our efforts over the past seven years — training, motivating and supporting hundreds in getting their commentaries published, and many hundreds more in saying “yes” to interviews — have made a difference.

But we’re aiming to move from an average of 29% female sources, speakers and experts to an average of 50% by 2025. While the goal is ambitious, we know it’s achievable, because some news media organizations are already there. And what sets them apart from their less attentive competitors is that they’re paying attention and making an effort.

That’s why we’re now gearing up to launch our What Gets Measured Gets Done campaign.

To achieve our goal of reaching 50% female sources, speakers and experts quoted and featured in Canadian media, we will:

We’re launching What Gets Measured Gets Done on October 18th, celebrating the anniversary of the Persons Case at an event on Parliament Hill.

In the process, we’ll recognize the incredible contributions of distinguished University of Ottawa law prof and indefatigable activist, Elizabeth Sheehy.

Although she has been speaking up for women’s legal rights her entire illustrious career, since participating in the second media engagement workshop we ever delivered in 2010, Ms. Sheehy has written and published 23 commentaries and given more than 100 interviews. Her extraordinarily well-informed opinions on issues related to all forms of violence against women have enlightened readers, listeners and viewers on a range of critically important aspects of the criminal justice system, and how it treats women who are victimized.

We’re also paying tribute to the producers and hosts of TVO’s The Agenda. The weekday news and public affairs program has not only helped to lead the conversation about the need for women’s voices in public discourse, it has also demonstrated that journalists who make an effort to include diverse sources — gender and otherwise —  can deliver context and analysis that is much more reflective of the diverse perspectives available in Canadian society.

Summer host Nam Kiwanuka will be on hand to represent the entire Agenda team, including regular host Steve Paikin, executive producer, Stacey Dunseath, and all their colleagues, who together have consistently achieved more than 45% female guests for more than two years now.

Here’s how you, too, can make a difference. Please:

What Gets Measured Gets Done is a business mantra frequently touted by executives as an effective means of monitoring performance and productivity. And millions of people sporting fitness trackers can attest to the motivational power of data to get them moving. You can help us to mobilize that kind of measurement and attention to bridge the gender gap in Canadian public discourse.

(In the meantime, for more on the relevance of “What gets measured gets done” in application to equality, see an earlier commentary published in the Ottawa Citizen on the inclusion of women on boards. Given the report just issued by Osler Hoskin Harcourt last week, it remains discouragingly relevant.)

Support our What Gets Measured Gets Done campaign and help us close the gender gap in Canadian public discourse by 2025. As a charitable non-profit, we’re able to issue tax receipts for all donations.